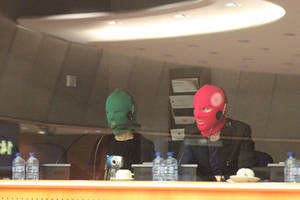 The Human Rights Committee of the European Parliament held a hearing on Russia today with members of the band "Pussy Riot", William Browder and others. Chair of the Committee Green MEP Barbara Lochbihler and the vice chair of the Parliamentary Committee on EU-Russia Cooperation, Green MEP Werner Schulz welcomed the speakers and were deeply concerned by their contributions. Commenting after the hearing, they said:

"The hearing revealed the alarming deterioration of the human rights situation in Russia after the retaking of office by Vladimir Putin. Two representatives of Pussy Riot pointed to the increasing number of political prisoners, while the well-respected Russian judge Karinna Maskalenko described the perversion of justice in an increasingly politicaly motivated judicial process. William Browder underlined this with the example death of his assistant and Russian advocate Sergej Magnitsky, the circumstances of which are still not clear.

The European Union may not continue with its strategy of diplomatic reservation and has to assume responsibility. Therefore we demand a clear change of paradigm in European politics. The EU must commit to clear messages and demands at government level and to an active support of Russian civil society.

The political developments and human rights in Russia are on the agenda for discusison at the next EU-Russia-Summit, which will take place at the beginning of June. The dialogue on human rights must not be pushed off to one side. The growing number of political prisoners and politically motivated trials and convictions must be condemned in the strongest terms.

The release of all political prisoners has to be a pre-condition for closer cooperation with Russia. Europe must not shy away from more active support for Russian civil society with financial resources, but also with a Europe-wide agreement on the recognition of political asylum for Russian civil rights activists."