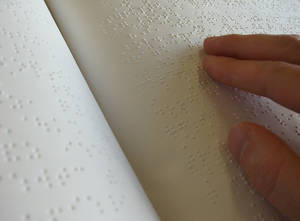 Among everything I’ve experienced in politics so far, the squabble over the Marrakesh treaty stands out as a particular letdown. A few European governments – including Germany and the UK – are currently playing a leading role in denying people with visual impairments urgently needed access to knowledge and culture for no defensible reason. Today, the European Parliament is calling on these governments to end their obstructionism in an unusually strongly-worded resolution.

The Marrakesh Treaty ensures access to knowledge for millions

According to the Convention on the Rights of Persons with Disabilities, people with disabilities have a fundamental right to equal access to information and culture. However, in the EU only five percent of all booksare published in a format accessible to people who are blind or have visual impairments, such as with large print, braille print or as an audiobook.

In many countries, copyright exceptions may allow converting books to such formats in certain circumstances even without the approval of the rightsholder – but that these exceptions are not internationally harmonised especially complicates international exchange.

The Marrakesh Treaty is meant to change that. However, since this international agreement was finalised in June 2013, ratification has remained pending for almost three years now.

For the treaty to come into effect, 20 of the 79 signees have to ratify it. So far, only 13 countries have done so: India, El Salvador, the United Arab Emirates, Uruguay, Mali, Paraguay, Singapore, Argentina, Mexico, Mongolia, South Korea, Australia and Brasil. The EU is still outstanding.

The EU plays a key role in two ways

Over the five years of negotiation that led to the agreement, NGOs – chief among them KEI, who initiated the treaty – had to face relentless resistance by publishers and patent holders. Their lobbies attempted to block the treaty outright – in the end, they succeeded in watering it down considerably.

Letters from lobby organisations demonstrate how fiercly rightsholders fought even the smallest of concessions to safeguard human rights. For example, according to the Intellectual Property Owners Association:

Due to massive lobbying, deaf people were stricken as potential beneficiaries of the provisions of the Marrakesh treaty.

Many countries, including EU member states, had to be literally dragged to the negotiating table. In his closing statement at the finalisation of the negotations, James Love deplored the negotiations’ lack of transparency. His suspicion: Publishing everyone’s negotiating positions would have demonstrated just how many governments actively fought against the rights of people with disabilities.

Germany and the UK are still stalling the process

In 2013, the treaty was finally finished. Since then, many governments never tire of paying lip service to the importance of this treaty and its goals – including Germany’s. And yet, it has not come into force.

A blocking minority in the Council of the European Union led by the German government is obstructing ratification. They claim the EU is lacking the competence to ratify the treaty for the entire union. But the legal services of the Commission, the Parliament and the Council itself disagree – as do the majority of member states.

To resolve the situation, the Commission has referred the question to the European Court of Justice. The court is expected to confirm the Commission’s view of exclusive competence, but the decision will take months.

Contrary to what is sometimes claimed, this decision will not establish a precedent for other international treaties currently under negotiation like TTIP, TISA, etc. – their massive scope cannot be compared to the very specific Marrakesh treaty.

Should ratification not be the exclusive competence of the EU, every member state would have to ratify separately. In this case, it would take years for the treaty to be in force in all of the EU. This would especially complicate the international exchange of books, a central component, for many years to come. Countless Europeans would be excluded from benefiting from the rights the treaty enacts for them for an indefinite amount of time.

The United Kingdom is another member of the blocking minority. The UK government’s aversion to granting the EU any competence whatsoever without a fight is apparently so big, that they are willing to abandon their duty to uphold human rights. In doing so, it is squandering a chance for millions of people in the UK to benefit directly from EU membership.

Due to the continuous delays, the World Blind Union and the European Blind Union filed a petition with the European Parliament. Today, we vote on a resolution demanding speedy ratification. This increases the pressure on the governments holding up the process to end their obstructionism.

It is unacceptable to fight an intra-institutional turf war over competence on the backs of people with disabilities. The only effect of the behavior of these governments is to keep people with visual impairments from reading. It is purely a lack of political will that prolongs this injustice.

It is time that we have a debate on our governments’ roles in this gruelling process and once and for all make sure: