Right now the European Parliament and the Council are negotiating how a future bank collapse should be handled. The resulting Single Resolution Mechanism (SRM is supposed to be smooth machine for the rapid clean-up of collapsing banks "over the weekend". Instead, after pressure from Germany towards the European Commission, we've got a tortuous intergovernmental labyrinth with plenty of opportunities for national supervisors, authorities and ministers to be tempted to defend the interests of the banks they consider as their national champions.

Look at the diagram of this process from Green MEP Sven Giegold which and judge for yourself!

The goal should be to protect taxpayers and savers , which is what we'll be arguing for next week in Strasbourg. A simpler more European and more streamlined system that could actually protect European taxpayers from bloated banks in the future. 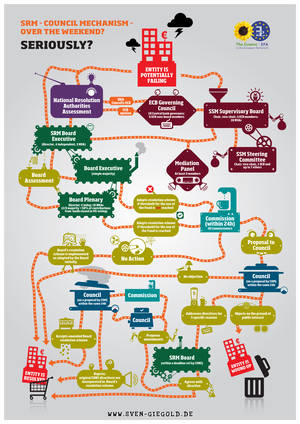