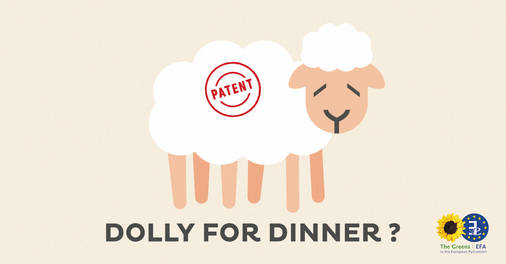 On Tuesday 8 September, MEPs will vote in plenary on EU legislation on the cloning of animals.

For years, Greens have been in favour of a ban on cloning as it has strong negative impacts on animal welfare and biodiversity. It does not offer any advantage to citizens, nor does it have any beneficial effect on food security, food safety or breeding improvement.

New legislation on cloning will make sense only if it includes a comprehensive ban on cloning, and on the placing on the market of food from clones and their descendants.

Greens are now hoping that in the plenary vote on 8 September, the whole European Parliament will echo this position.

So far, there is no EU legislation on cloning and food from cloned animals has been covered by the Novel Food Regulation.  Member States report that no cloning for food production takes place on their territories. However there are lots of uncertainties as to the extent of imports of clones or reproductive material of clones. Food from cloned animals could be lawfully placed on the market (thanks to a pre-market authorisation). As for food from descendants of cloned animals, there are no rules at all, so it can enter the market unnoticed!

After lengthy discussions on the issue, since 2008, the Commission presented two proposals related to cloning in December 2013: one on cloning of animals [1] and the other on food from cloned animals.

Greens supported the progressive report, voted in committee last June, which calls for a ban on cloning and a ban on placing on the market and import of cloned animals, their reproductive material and their descendants.  For the Greens, including the ban on food from descendants of cloned animals is a crucial point for the vote on the final report on 8 September.

Why Greens are in favour of a ban: our main criticism on cloning 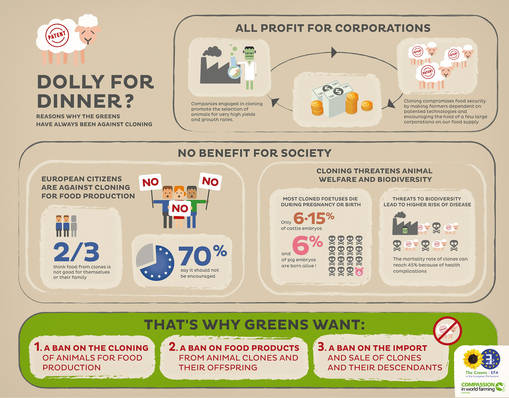 Success rates - defined as cloned animals born alive- are very low (<1-20% depending on the species). And even animals born alive are likely to fall ill soon and die early. It is in fact very rare for an animal to survive for more than a few years. Even after 25 years of research in animal cloning, viable animals only emerge in very rare cases (6-15 % for cattle and 6 % for pigs.  Cloned animals also have much higher rates [2] of morbidity and genetic abnormalities than sexually reproduced animals. For these reasons civil society organisations denounce cloning as the violation of the dignity of creatures and a shift of ethical limits to the effect that animals are increasingly degraded into standardised and manipulable material. In addition, further developments in cloning technology are likely to lead to human cloning attempts.

The principal purpose of cloning is to produce multiple copies of animals with fast growth rates or high yields.  On the other hand, creating a livestock population that is genetically identical due to cloning reduces genetic diversity, putting the entire livestock population at a higher risk for disease (e.g. leg disorders and cardiovascular malfunction in fast-growing pigs, and lameness, mastitis and premature culling in high-yielding cattle), and potentially wiping out entire herds. Currently, animal breeding of different species is already based on only a few genetic lines. Cloning would narrow these lines even more and restrict the possibilities for adaptation to a changing environment.

According to latest Eurobarometer reports, EU citizens have strong doubts about cloning.

In the 2010 Eurobarometer report 57% of respondents agree that animal cloning in food production is not good for either themselves or their families and 64% disagrees that it is safe for future generations. 77% consider animal cloning in food production fundamentally unnatural and 70% feel that it should not be encouraged. European citizens also think that moral and ethical issues should influence decisions about animal cloning and that regulation by governments is necessary.

When it comes to labelling and consuming habits, the 2008 Eurobarometer poll had already revealed that a big majority of 83% of Europeans is convinced that special labelling should be required if food products from the offspring of cloned animals became available in the shops. 63% stated it was unlikely that they would buy meat or milk from cloned animals, even if a trusted source stated that such products were safe to eat. EU citizens also agreed that the long-term effects of animal cloning on nature were unknown (84%), that animal cloning might lead to human cloning (77%), that animal cloning was morally wrong (61%) and that cloning might decrease the genetic diversity within livestock populations (63%).

With such criticism and the EP speaking with one voice for years against cloning, why does the European Commission come up with these very weak proposals? Who would benefit from them?

Cloning: The golden goose for free-trade and corporations

In the name of trade, it seems that the US in particular has been successful in convincing the Commission, already with previous Commissioner Karel de Gucht, that a weak legislative proposal on animal cloning would be a precondition for the planned Transatlantic Trade and Investment Partnership agreement (TTIP). The US claims that market access of foreign products would be impeded if the EU was to establish traceability and labelling rules on cloning. This despite the Commission 2010 cloning report stating that it would be easy to require operators to mention whether or not the reproductive material derives from a clone.

So, prior to a TTIP deal, the European Commission is watering down proposed rules on animal cloning. The proposed ban on cloning of animals and the sale of products from clones does not extend to their descendants. This risks opening the market for these products from the US, where cloning of animals for food is allowed. This will inevitably lead to an increase in the use of descendants of clones in the food chain in the EU, in order to remain competitive and meet legal requirements on free trade.

Cloning is also the proverbial golden goose for corporations. Enterprises engaged in cloning are not only interested in selling single animals at high prices, but also in making profits from patenting their "inventions".  In general, a patent on a process for the cloning of animals does not only cover the process but also any derived embryos and animals. This could lead to farmers and breeders becoming increasingly dependent, whilst encouraging further concentration in the animal breeding business and deepening the hold that a few large corporations already have on our food supply.

The benefits of cloning for society have never been demonstrated. There is just no need for it in food production. This is why on 8 September, Green MEPs will vote in favour of a progressive report calling for:

[1] An animal clone is a genetic copy of a donor animal. The clone is not produced in order to serve for meat or milk production, but for research and breeding purposes. The clones are considered as elite breeding animals rather than food. It is their sexually reproduced offspring and their descendants that become the food-producing animals.

Cloned animals are not genetically modified animals (which genotype has deliberately been changed, e.g by the insertion of new gene sequences or exchange of gene sequences). But genetically modified animals can of course also be cloned. The proposed directive on Cloning of animals provisionally prohibits the cloning of animals and the placing on the market of animal clones and embryo clones, but fails to prohibit the placing on the market of reproductive material and descendants of animal clones. It only covers several species and does not include traceability measures.