Key issues over the past few weeks included:

EFA MEPs and staff participated in a working visit to Catalonia at the invitation of Esquerra MEP Oriol Junqueras during the last week of June. The visit included meetings at Esquerra party headquarters and at the Catalan parliament, as well as visits to the Abbey of Montserrat and the FC Barcelona foundation. 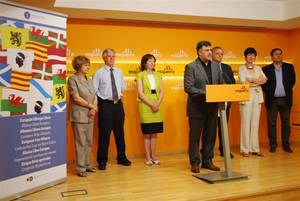 CFP Reforms present new risks
SNP MEP Ian Hudghton MEP expressed concern at the contents of the European Commission's proposals to reform the Common Fisheries Policy, announced in July. Whilst welcoming certain aspects, he expressed concern that the European Commission had failed to properly address the fundamental problems of over-centralised control and has failed to propose an adequate return of powers to fishing nations and regions.

The proposals also open the door to the international trading of quotas which would devastate Scottish fishing communities and see a concentration of fishing rights in a small number of overseas companies.

Ian commented: "The Commission's acceptance that the CFP has utterly failed and must be radically reformed is to be welcomed. For too long the CFP's regulations have forced Scottish fishermen to throw fish back into the sea - and efforts to eliminate discards have long been supported by Scotland's fishing industry. The proposals however still smack of top-down Brussels control.

"Fortunately these proposals are just the first stage in the process. The European Parliament and the Council of Ministers must now make amendments - and it is essential that all Scotland's politicians work with the Scottish government to ensure a positive outcome."

Parliament voted in July on a package of measures to provide clearer information to consumers including clear labelling of country of origin, clearer nutritional information, and a standard set of compulsory information such as list of ingredients and best before date. There is also a requirement to clearly highlight allergens in the list of ingredients.

Speaking after the vote, Frieda commented: "Being overweight or obese are becoming more and more serious problems for people's health in Europe. Having more transparent information available about food will make it easier for consumers to make an informed choice about the food they eat. The existing legislation is hopelessly outdated. The requirement for a standard form of presenting nutritional information is an important step forward that will help consumers make an easy comparison."

Jill Evans has been campaigning on the issue with representatives of the Women's Institute (WI), focussing on mandatory country of origin labelling. Despite the UK government insisting that a voluntary scheme is sufficient, recent research by WI members has revealed that products without appropriate labelling can be found in most supermarkets.

Jill commented: "This new law will ensure that the country of origin is labelled on all fresh meat. The campaign does not stop here though. We still want all meat and dairy products to be labelled with their country of origin. The European Commission has to produce a report with an impact assessment on extending the law to cover these products in the next two years. In this time, I will be working with the WI as well as consumer groups and farming unions in Wales to ensure that we get the best labelling possible for our consumers."

The SNP's Alyn Smith gave the package a cautious welcome, commenting: "While I'm pleased that we have come to some agreement in this extremely long-running legislative file, it's disappointing that our progress for consumers, who have the right and the interest to know what is in the food they eat and where it comes from, has been so slow. It is definitely a positive that we have finally secured compulsory place of origin labelling for meat, but too many key issues have been kicked into the long grass."

Roaming rip-offs must be tackled

SNP MEP Ian Hudghton welcomed proposals from the European Commission in July to further lower the costs of using mobile phones abroad. The package of measures to lower charges for mobile internet use when abroad (data roaming), follows an earlier announcement of further reductions in the cap on mobile voice calls and text messages from other EU countries.

The European Commission proposes to introduce a cap of 80p per megabyte for data roaming from July 2012, falling to 45p in July 2014. Currently, users are charged up to £2 per megabyte for data roaming. By 2014 mobile voice calls and texts from other EU countries will be capped at 21.5p a minute for outgoing calls and 9p a minute for incoming calls.

Ian - who's been campaigning for reduced mobile phone roaming charges in Europe since 2005 - commented: "This is a welcome step forward in further reducing mobile phone roaming charges, and represents a victory for consumers. We've already had some success in reducing charges for voice calls and text messages when roaming in other EU countries. These costs are set to fall further and by 2014 outgoing calls made from mobiles in other European countries will be capped at 21.5p a minute.

"But with more and more people using mobile devices that rely on downloading data, it's absolutely vital that we get a fair pricing structure in place and encourage competition in the market. At present mobile phone companies are able to charge a not so small fortune for data roaming and this is totally unacceptable. That's why we have to end the data roaming rip-off, and I will be supporting these measures in the European Parliament."
Common approach to road safety
Flemish MEP Frieda Brepoels supported moves towards a more uniform EU approach to road safety. Frieda is a member of the Parliament's Transport and Tourism which recently made a visit to the trans-frontier region of Maas-Rhine which takes in Flanders, the Netherlands and Germany.
The visit highlighted the need for improved co-ordination in the field of road safety, and Frieda commented: "In their day to day work in this region the police have to cope with a lack of co-ordination in national approaches to speed, alcohol limits, payload capacity and other restrictions. All of this makes it more difficult to take a co-ordinated approach to improve road safety and shows the need for a more uniform approach at EU level." The Transport Committee has called on the European Commission to bring forward a clear and co-ordinated plan to improve safety on Europe's roads.
Also in July, the Transport and Tourism Committee considered a report on creating a new political framework for tourism in Europe, making Europe the world's number one tourist destination. At Frieda's instigation the report now includes references to accessibility, participation and sustainability, as well as the possible creation of an EU Tourist's Charter.

The first Macedonian - Greek Dictionary ever published in Greece

EFA MEP François Alfonsi joined colleagues from the Centre Maurits Coppieters (CMC) and the Home of Macedonian Culture (HMC) to present the first Macedonian-Greek Dictionary ever published in Greece.
The publication was launched at a conference in the European Parliament entitled 'Bridges for Dialogue' and was hailed as 'a step forward towards normalisation of the Macedonian-Greek relationship'.
The Centre Maurits Coppieters www.ideasforeurope.eu promotes policy research at a European and international level. 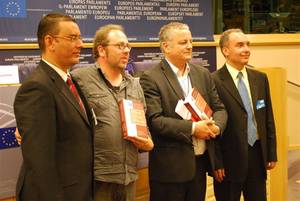 MEPs including François Alfonsi and Oriol Junqueras hosted a conference on artists and social inclusion in late June at the European Parliament. Delegates heard that for more than twenty years, various artists in Europe have undertaken projects involving people at schools, in prison, in the street, in suburbs and in other places where communication is fragile or even broken.

There was criticism of the lack of political will to support the work of artists in tackling social exclusion.

After the conference, a seven point statement was published, addressed to Europe's Culture Commissioner, Androula Vassilou. Amongst other demands, participants called for an increase in funding for cultural projects to tackle social exclusion in the next EU budget period 2014 - 2020.

Speaking in Parliament, Tatjana argued: "The free movement of people within the Schengen area has been one of the biggest achievements of European integration. Therefore only real threats could be a reason for the reintroduction of border checks, as a last resort. Such threats must be immediate, not merely hypothetical.

"As regards the procedure, it should be European in nature. By the Schengen Borders Code the EU has exercised its competence concerning the reintroduction of border checks. This means that the Member States cannot legislate on it any more. Also we deplore the fact that the current procedure is de facto unilateral; this matter is already within the framework of EU law, not national law. Therefore we suggest that the Commission takes one step further and proposes a mechanism whereby the European Union institutions will decide on the reintroduction of border checks."

Poland took over the rotating six-month presidency of the European Council in July and MEPs were able to debate the Polish presidency programme with the country's Prime Minister, Donald Tusk. Catalan MEP Oriol Junqueras took part in the debate and reminded the Polish Prime Minister that as someone belonging to a minority himself, he should be more sensitive to the needs of Europe's stateless nations.

Addressing the Prime Minister, and speaking in Italian, Oriol said: "Prime Minister, you are a Pole who belongs to the Kashubian minority and for that reason I hope you will be able to understand why today I as a Catalan member am addressing you in Italian. The reason of course is that my own language, the language of more than ten million Europeans, is not yet recognised as an official EU language.

"I believe that Poles and Catalans are in many ways brothers. In 1939 we were both victims of the fascists. We were victims of Franco, and you were victims of Hitler and Stalin. And just as we were brothers in one of the greatest defeats of the twentieth century, so might we also be joined in working for freedom and democracy in the twenty first century. And in this sense let us work together to defend the rights of minorities and to see that Catalunya, Scotland, Flanders and others may like Poland become new EU member states."

Alternatives to herbicide in weed management