Several EFA MEPs have given their backing to the campaign for a single seat for the European Parliament.

At an event in Brussels, MEPs signed a pledge calling for an end to the Parliament's monthly commute to Strasbourg which costs the taxpayer some 180 million euros annually. 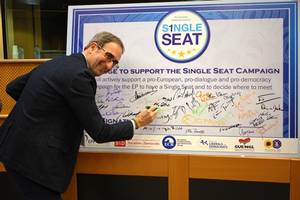 There is also a huge environmental impact, estimated at an additional 19,000 tonnes of CO2 due to the monthly 409km each way trek to Strasbourg.

MEPs have voted in the past to end the wasteful practice but the final decision is for EU governments.

The Strasbourg home of the European Parliament stands empty for an astonishing 317 days a year, but is still heated or air-conditioned and lit.

Most of the work of the Parliament is actually carried out in Brussels, and MEPs would like to see the Parliament's activities based in one location.

An EU wide petition has already drawn more than one and a quarter million signatures calling for one seat for the European Parliament.