MEPs from the European Free Alliance Group have shown their solidarity with the Greek people, and their support for a fair deal for Greece following the recent referendum on the country's bailout conditions. 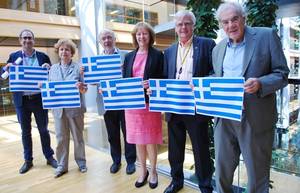 European politicians are debating a response to the Greek 'no' vote in the referendum this week, in Strasbourg and in Brussels.

EFA MEPs said that the result of the referendum should be respected and that Greece should be offered a fair deal in negotiations.