EFA - Visit to Israel and Palestine

I have been to Palestine and Israel many times in the past fifteen years and I have seen many changes, but some things stay the same. The occupation, of course. The siege of Gaza. The settlements. The continuing lack of justice for the Palestinians.

Having arrived in Tel Aviv in the early hours of the morning, our first meeting of the day was with Peace Now, an Israeli organisation, set up in 1978 to work for a two state solution.

Peace Now believes that the military occupation damages Israel economically and politically and that ending the occupation would mean that Israel can remain democratic. 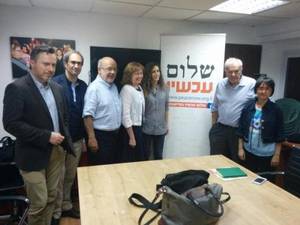 They outlined the work done by Settlement Watch which monitors and alerts people to new settlement development. Israeli settlements in the occupied territories are, of course, illegal under international law.

The main focus of their work is promoting peace and democracy through education within Israel.

They make good use of social media, in particular, to reach young people: Israeli people, apparently, spend most time on Facebook, including politicians who often use that medium to make important statements.

The majority of Israelis support two states, but many do not believe it will happen.

That is why Peace Now see themselves as the "gatekeepers" of the two state solution under the current government. They believe that it was ultimately the issue of security that determined the recent election result and not the economic situation. They are actively working with politicians and the public to bring about change and were deeply concerned about government moves to limit funding to NGOs working on peace issues.

From Tel Aviv we moved on to Jaffa and The Etty Hillesum Theatre for youth at risk.

This was set up in 1998 and is the home of two theatre companies working together, and independently, in Arabic and Hebrew. Although under threat of closure, the theatre was providing a unique opportunity for young people to learn about tolerance and conflict resolution through the arts.

Our afternoon was spent touring East Jerusalem to see the effect of proposed new settlements and government policies, followed by a meeting with the Governor of Jerusalem and Minister of Jerusalem Affairs, Mr. Adnan Alhusseini. 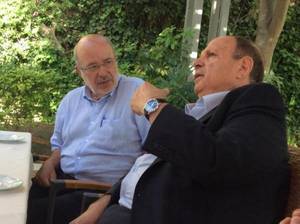 Despite his prestigious position, he was not allowed to to have an office or to organise any political activity in the city. He did not believe that any benefits had come from twenty one years of negotiations. The Palestinian issue must be internationalised, he believed.

As MEPs, we will be further exploring our role in this in the coming days.

We can be proud that Wales was the first country to appoint a Children's Commissioner to protect and enhance the rights and welfare of children.

Children in the Silwan area of East Jerusalem have no such protection, despite Israel having ratified the Convention on the Rights of the Child. The neighbourhood is under threat of demolition to create a new tourist centre and national park and many settlers have moved in already.

The threat of demolition is not the only thing that affects the lives of children in Silwan.

Hundreds of children aged between seven and seventeen are arrested every year - 39% between 4am and 5am. 63% were denied food and water during interrogation; 83% were threatened or insulted;  55% had their hands and legs tied and 48% of them were transferred to house arrest, often for an unlimited time and in a different area.

The majority didn't understand the Hebrew documents they signed and none were allowed a visit from family members in detention.

These were the findings of a survey carried out in 2013. It is not surprising, then, that 65% of children in Silwan drop out of school. Children miss school for weeks or months on end.

In contrast to this, it was a delight to meet the children in the Azhar Abu Al-Nowwar Kindergarten.

This Bedouin community is threatened with forced removal from their beautiful and remote mountain top site because the Israeli Government wants the land. The school, of course, would be demolished. Although it is mainly for four and five year old pre-school children, today there were children of all ages there for the summer camp. 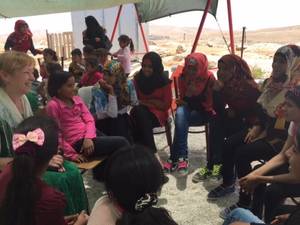 It is the most basic of schools imaginable, with little furniture and a tarpaulin cover stretched over to protect them from the heat of the summer. Yet the children, teachers and parents love it and want it to stay. They made that very clear to us.

We heard officially today that we won't be allowed into Gaza tomorrow. That was the decision we expected, yet it was disappointing.

But it does mean I will have the opportunity to visit Hebron again, where people have such difficulty going about their everyday lives because of the checkpoints and restrictions. 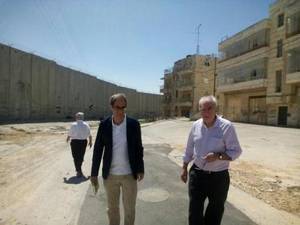 And I will remember my friend and fellow peace campaigner Ray Davies, who was devoted to the cause of justice in Palestine and who did so much for people in Hebron and all over the West Bank and Gaza. I vividly remember Ray's joy in being able to work with the people here as well as his heartbreak at the oppression he saw at first hand.

Our final stop today was Ramallah and the headquarters of the the Palestinian Ministry of Foreign Affairs.

This new and modern building is a world away from the site of the bomb-damaged and fortified compound I visited in 2000 when Yasser Arafat was President and under prolonged siege from the Israeli military.

Appearances may have changed and soldiers are not everywhere on the streets in Ramallah, but the struggle for peace is no less difficult.

One aim I had in Palestine was to see the kindergarden that Gol!, the Wales Football Supporters, had visited when Wales played Israel in March.

Following a fundraising concert, they donated equipment to the school. The United Nations Relief Agency (UNRWA) agreed to take me to the school in a Bedouin community called Sateh al Bahr. We found them tucked away in the mountains and only accessible by landrover.

Although not far from Jerusalem, it was like another world. The Bedouins are no longer nomadic but they still live in the hills in tents and farm goats and sheep. They are not connected to services so their water comes from tanks and is often piped over long distances so it is hot by the time it arrives.

They are not on mains electricity although more and more solar panels could be seen, providing power to individual homes. Although they have thrived for years on this isolated lifestyle, to live without amenities is not a choice of theirs. The occupiers refuse to allow them these very basic of services.

There was no escaping the pull of that incredible landscape, however. The bright blue of the sky contrasted with the yellow-orange of the barren mountains. They certainly looked bare, but we were told that they were grass covered in the rainier season and that there was still enough grass growing on the top to feed the goats. Despite the silence and the beauty, it was obviously a hard life. 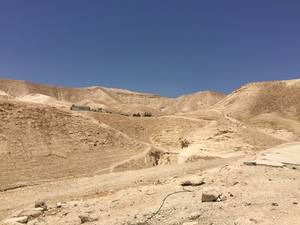 Yes, these families, too, were under threat of eviction. I hadn't noticed until it was pointed out to me, but even above this camp was a settler's house on the summit, overlooking their land. They hadn't had any real problems, but they knew that the Israeli Government wanted to move them to get control of the land. They told me that were they to herd their animals up there to graze, they would attract trouble from the settlers. Their ability to herd and graze their animals over the years had shrunk considerably. Agriculture was increasingly a feature in forced evictions.

Yet the Bedouin people have thousands of livestock which they would have to sell if they moved because there simply wouldn't be room for them. After all they weren’t being moved in order to maintain or encourage their way of life, they face the threat of urbanisation. Their destination is not vast farmland but small parcels of land in a village not far from Jericho.

The Bedouins were fighting the move. Each family had a lawyer from the Norwegian Refugee Council and UNRWA estimated that the process could take between one and three years between the objections and the preparations of a new site.

Despite the problems, the UNRWA staff were very enthusiastic about a business that had started up in the area quite recently and had the makings of a great success. We went to meet the two young Bedouin men who had launched Sahari: Desert Eco-Tourism in Palestine. They had a large traditional Bedouin tent, bedecked in hangings of all kinds and all colours, with carpets covering the floor and a table in the centre with the usual coffee pot. 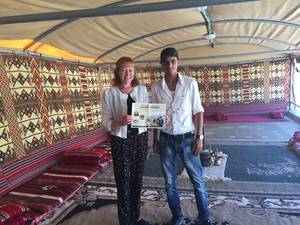 They had trained and qualified in Bethlehem before setting up the business. They offer the experience of hikes in the mountains and deserts of Palestine while learning the songs and stories and traditions of the Bedouin, and the opportunity to camp under the stars. Not only was this a unique venture, but the money they made went back into the community, including the kindergarden which they had built.

The pre-school unit was right next to the Bedouin tent. It was a tiny portacabin with the Palestinian flag painted on the outside. The children were shyer than the ones I’d met the day before in Al-Nowwar because they were younger and a far smaller group. I’d taken a huge Welsh flag to show them and they eyed it with wonder. It’s a friendly dragon I told them, and with that reassurance they were more than happy to take a photograph with it! 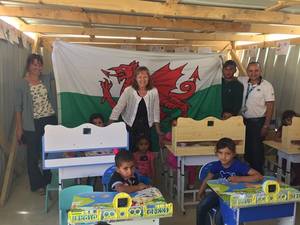 We took our leave of this wonderful area and headed back down towards the famous Sea Level sign and back to Jerusalem. UNRWA told us that protection was the number one goal in their new strategy. I met so many people who needed that protection, from the three year olds in the kindergarden to the elderly members of the Bedouin families. They are Palestinians living in Palestine. They only need protection because their country is illegally occupied and the occupier ignores humanitarian and international law.