EU must do more to tackle human trafficking

The EU must take a more joined-up approach to tackling the serious issue of human trafficking, according to SNP MEP Ian Hudghton.

A parliamentary question tabled to the European Commission by the SNP MEP has revealed that data collection on human trafficking is often patchy and not entirely up to date across some EU member states. 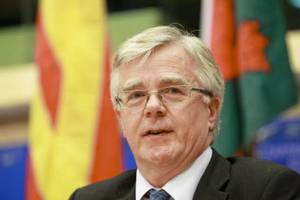 The EU Commission is set to publish a report on the issue later in 2015, and under EU law member states are obliged to tackle the issue.

"It is an uncomfortable fact that every day people are bought and sold for sexual exploitation, forced labour, street crime, domestic servitude or even the sale of organs. Men, women and children are trafficked within their own countries and across borders.

"I warmly welcome the Scottish Government’s recently published Human Trafficking & Exploitation (Scotland) Bill.  There are a lot of measures in the bill which will give Scotland’s law enforcement agencies greater help in bringing those responsible for human trafficking and exploitation to justice, as well as guaranteeing victims support.

"Human trafficking isn’t something that stops at borders, though.  Therefore it is imperative that communication, collaboration and data collection in all member states is of the highest standard. One of the things the Commission’s answer to my question flags up, and this was backed up by November’s EuroStat report, is that data collection and collaboration amongst member states is not always consistent.

"With the Commission planning to publish a report later this year, I am calling upon them to ensure that all the data is made fully available to properly analyse whether or not human trafficking is still an increasing problem".

In their reply to Mr Hudghton the European Commission said: "... As the report is based on numbers of reported cases, and not all Member States were able to provide data for all categories it is not possible to say whether the phenomenon is increasing or whether the reported cases where a result, for example, of effective prevention initiatives or/and successful investigation operations by the authorities. In 2015, the Commission will issue a report assessing trends in Trafficking in Human Beings, measuring results of relevant actions including statistics."