The fight to get on the right track 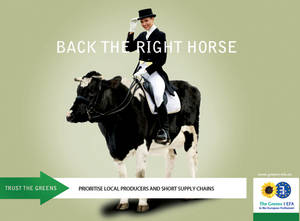 Over the past few years we have seen the horsemeat scandal, battery cage eggs marketed as organic, road salt in foods and numerous other cases of fraud or fraudulent labelling in the EU food chain. In response to all this, MEPs in the Environment Committee (ENVI) drafted a non legislative report on the Food crisis and fraud in the food chain which  will be voted in plenary in Strasbourg Tuesday.

The complexity and cross-border character of the food chain, in combination with the predominant focus on food safety and the national character of controls and enforcement are often cited as contributing to an increased risk of food fraud. On the other hand, the economic gain of fraud is further enhanced by the often ineffective regime  of relatively low sanctions and large differences between Member States’ practices. The report voted in ENVI is promising as it includes the most important issues to tackle food fraud. In particular it enhances the Food and Veterinary Office's (FVO) role in detecting food fraud cases; suggests reviewing rules for intermediary labelling and reviewing traders and proposes to increase sanctions. The report also recognises possibly positive effects of country of origin labelling, points to the problem of mislabelled fish species and calls to enable the rapid exchange of information between Member States and the European Commission in cases of food fraud and by rejecting any plans to delegate inspection tasks from public authorities to economic operators. The Greens/EFA group recognises the beneficial aspects of this report to fight against food fraud and should vote in favour for the plenary vote. However, the problems posed by the current food system remain. The food industry involves ever longer travel distances and consists of many points where the integrity of the food chain can break down. This highly vulnerable food system produces a scandalous amount of food waste (up to 30% of the food produced in Europe per year, i.e 100 million tons) and is responsible for animal suffering and high levels of greenhouse gas emissions. In order to complete a sustainable and fair evolution in the battle against food fraud, the farm-to fork connection should be restored by prioritising and supporting regional, transparent and short-distance food supply chains, quality food at a fair price as well as local and seasonal products.

Ban on Bisphenol A in all Food contact materials