Today, unfortunately, the controversial Trade Secrets directive was formally adopted by the Council, but only after several delays due to disagreements over how specifically to translate a key provision in the text: the word "wrongdoing". This confusion at such a late stage in the democratic process clearly shows that specific EU legislation to effectively protect those that disclose public interest information, is desperately needed. 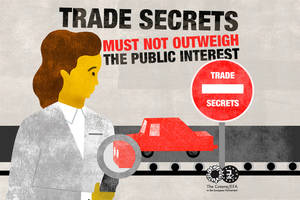 "Wrong doing" is an important word because in this case it relates specifically to whistle-blowers, and it determines to what extent those blowing the whistle, releasing trade secrets such as a list of clients (Panama Papers), the software within cars (Dieselgate scandal) or the details of a dodgy contract between service providers, would be liable for prosecution under the new trade secrets directive.

The problems whistle-blowers and journalists would face were hotly debated during the adoption of the trade secrets directive, which the Greens/EFA group opposed from the beginning because of the excessive secrecy rights granted to private companies and the near-complete disregard for freedom of information, freedom of expression, the rights of workers, and the protection of whistle-blowers - making it an overly one-sided text. Exception for whistle-blowers adopted by the European Parliament "Member States shall ensure that an application for the measures, procedures and remedies provided for in this Directive is dismissed where the alleged acquisition, use or disclosure of the trade secret was carried out in any of the following cases: for revealing misconduct, wrongdoing or illegal activity, provided that the respondent acted for the purpose of protecting the general public interest" However, other groups in European Parliament defended the trade secrets directive and voted for its adoption, precisely because it included an exception for whistle-blowers. During various debates on the matter, they insisted that the inclusion of the word "wrong doing" would ensure that whistle-blowers like Antoine Deltour and others involved in exposing the #LuxLeaks scandal would not be prosecuted under the Directive because it covered also immoral behaviour, not just illegal acts. This reading of the text was backed up by the official French translation, which clearly covered immoral behaviour. We had serious doubts about this analysis, calling for the directive to be scrapped and the vote postponed, but we were outvoted by the majorities in the Parliament.

Then it was the Council's turn: the 28 Member States needed to rubber-stamp the text adopted by the European Parliament for it to be officially adopted as an EU law. However, already in the days running up to the vote in Parliament, the French-speaking countries in Council decided that the Parliament's translation of "wrongdoing" into French ("comportement inapproprié") was not what they wanted, and so they began to bargain behind the scenes with the Parliament's legal translators, to change it to a much narrower wording that would leave whistleblowers disclosing information about legal activity in the cold. Indeed, for a brief moment during the Parliament's vote, the translation of "wrongdoing" on the Parliament website mysteriously turned into "faute professionel", but was quickly changed back again after MEPs complained that this was totally incorrect.

What the Greens/EFA think

Our position on this whole matter is that it is unacceptable that Council should be allowed to disguise a political decision as a technical one, and to secretly interfere with the translations of a text about to be voted in Parliament. One has to wonder why the French-speaking countries in Council, including Luxembourg where Antoine Deltour is on trial, were this keen on changing the translation of wrondoing, if it makes no difference for cases like Deltour's. We believe that any change of this particularly controversial text that was deliberately chosen by Parliament is unacceptable. Should it actually become apparent that there are significant differences between the translations of a law that has already been adopted, any solution has to be found in a transparent process that allows the intention of the legislator to be fully reflected. We would have preferred to wait so MEPs could have the chance to obtain independent legal advice on the differences between the different translations, but everybody else was keen to rush this through in a first reading procedure and they wanted at all costs to avoid re-opening the trilogue negotiations. We believe that sensitive texts with such a wide impact should be adequately debated, thoroughly researched, and only then decided upon. This is yet another example of shortcomings of the trilogue process, that have led the European Ombudswoman Emily O'Reilly to launch an investigation into trilogue transparency.

Though we cannot stop the adoption of the directive now, we will work twice as hard to ensure that a robust EU law is put in place to adequately defend whistle-blowers across the EU. See here for more information on our proposal for a law to protect whistle-blowers - we need your support!