The Greens/EFA group has agreed to nominate Can Dündar, a Turkish journalist, columnist and documentarian, for this year's Sakharov Prize. 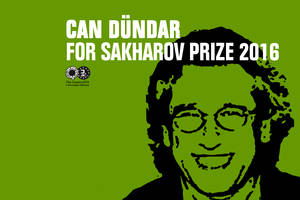 He was the editor-in-chief of daily Cumhuriyet between February 2015 and July 2016. Together with Erdem Gül, the Ankara bureau chief, Can Dündar was arrested in November 2015 after his newspaper published footage showing Turkey’s National Intelligence delivering arms to rebels in Syria.

After being held in jail for 92 days, Turkey’s Constitutional Court ruled that their “freedom of expression and freedom of press had been violated” and both were subsequently released pending trial. On 6 May, Can Dündar was sentenced to five years and 10 months in prison on charges of helping an armed organisation and divulging state secrets. The same day he survived an assassination attempt. Can Dündar has lodged an appeal against the sentence.

After the failed coup on 15 July, Dündar resigned as editor of Cumhurriyet. He has also announced that he will not surrender to the judiciary until the state of emergency is lifted. Can Dündar has left the country as Turkey is no longer considered a safe place for him.

Turkey ranks 151st out of 180 countries in the World Press Freedom Index 2016 and has become the world’s worst jailer of journalists. Can Dündar has become a symbol of the resistance against President Recep Tayyip Erdoğan’s crackdown on the media.

Awarding the Sakharov Prize 2016 to Can Dündar would send a powerful signal of European support to freedom of the media and freedom of expression in Turkey and a message of hope to the liberal democratic forces of the country.

About the Sakharov Prize

The Sakharov Prize for Freedom of Thought was set up in 1988 and is awarded each year by the European Parliament. It is named after Soviet dissident Andrei Sakharov.

The prize is awarded for a particular achievement in one of the following fields:

The winner will be announced at an award ceremony on 14 December. Previous Greens/EFA nominations include Raif Badawi (2015), Leyla Yunus (2014) and Edward Snowden (2013).