MEPs have backed calls for a European Roadmap for Linguistic Diversity to support Europe's regional, minority, and endangered languages.

The European Network to Promote Linguistic Diversity (NPLD) this week launched a consultation on the proposed roadmap at an event hosted by Plaid Cymru MEP Jill Evans. 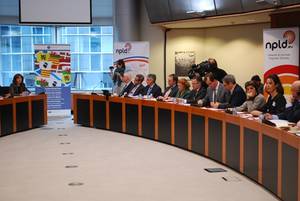 They want the European Union to fulfil its obligations to support Europe's diverse tapestry of regional, minority and endangered languages, not simply focus on the EU's 24 official languages.

The impetus for the roadmap was a ground-breaking report by former Corsican MEP François Alfonsi, adopted by a large majority in the European Parliament in September 2013.

The report by the former EFA MEP called for more to be done to help 'intergenerational transmission' so that languages are passed on from one generation to another. It also called for clarity on the EU funding that may be available to support endangered languages over the coming years.

But campaigners are disappointed at the lack of action by the European Commission since then and it is hoped that a roadmap will help the Commission focus on the kind of support it is able to provide. 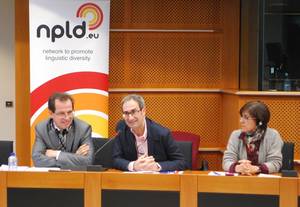 Launched this week, the consultation runs until the end of May and the final roadmap will be published in October this year.

As well as providing support for endangered and regional languages, the roadmap also envisages enabling people to engage with EU programmes and ICT initiatives in any European language, regardless of the number of speakers.

It is estimated that there are approximately 250 languages indigenous to Europe, and around 120 endangered languages within Europe's borders.

"As a Catalan speaker it means a great deal for me to be able to use my own language in as many settings as possible. Sadly that's not possible in the European Parliament at the moment, for purely political reasons. But I hope very much that we will make progress on that in the near future.

"The EU has an obligation to support language diversity set out in article 3 of the EU Treaty. It says quite clearly that the EU shall respect its rich cultural and linguistic diversity.

"But not enough has been done since the major report by François Alfonsi in 2013. This proposed roadmap is very timely, and will help the EU focus its efforts and initiatives relating to language diversity."

More information about NPLD and their consultation can be found at www.npld.eu