The EU and the global arms trade

Looking beyond the 2013 ATT conference 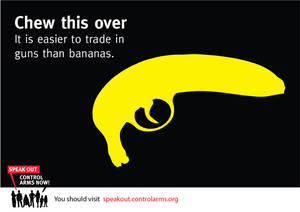 Despite the initial disappointment when UN members were unable to agree on an international Arms Trade Treaty (ATT) in July 2012, hopes are high for the new rounds of talks in New York starting on 18th March.
Arms trade remains a legal grey area with very little international regulation and transparency. Indeed, there are more international laws regulating the trade in bananas than in weapons and more than 40 UN Member States do not have a regulatory framework for the control of arms transfers. The EU is the biggest arms exporter in the world granting arms export licences worth 37.52 billion Euro in 2011. Compared to other countries, the EU has a very robust legal framework called Common Position (2008) regulating the external arms transfers of EU members via eight legally binding criteria. For example, member states should take into consideration whether human rights in the country of arms transfers are respected (No. 1) and whether there is a risk that the military technology or equipment will be diverted within the buyer country or re-exported under undesirable conditions (No. 7). Throughout the ATT process the EU has been trying to further the elements of its Common Position into the global arms trade treaty and indirectly promote it as a model for all international arms transfers. Whether or not we see the elements of the EU's position in the ATT will become clear very soon. However, it is interesting to see how the EU's position is currently developing. What are the emerging trends in the EU's arms transfers? Inside the EU the line of development has been to treat arms and military technologies increasingly as part of the common market. In 2009 the Commission adopted a Directive on intra-EU-transfers of defence-related products which has simplified and unified licences for internal arms transfers. Currently transfers between EU members are regulated mainly by Commission directive whereas the external transfers outside the EU borders are subject to agreement (the 2008 Common Position) between member states and monitored by the COARM working group of the European External Action Service (EEAS) Assuming that the ATT finally gets adopted, it would be in the EU's interest to level up the discrepancy between internal and external regulation of arms transfers. In the best case scenario the new ATT and the EU Common Position will compliment each other by creating more control and leaving less space for different interpretations.