Transparency of Meetings with Lobbyists

The Green/EFA group is committed to lobbying transparency and to the equal access of stakeholders to the decision-making process. That is why we are now the first political group in the European Parliament to automatically publish information about meetings held with lobbyists and interest representatives such as civil society organisations. We have decided to use a newly-developed tool which is open-source and which can also be used by anyone who wants to be transparent about their meetings. The tool takes information from our MEPs' calendars, and publishes the information on their websites the day after the lobby meeting takes place. This allows all citizens to see who we are meeting, when we are meeting them, and what we talk about with outside stakeholders. This was one of the promises made by many of our MEPs before the European elections.

We have chosen the anniversary of the European Commission's lobby transparency policy to launch this initiative, and to call for further action to be taken in the field of lobbying transparency in the EU. We are already disappointed that the European Commission is late in delivering on its promise to propose a mandatory lobby register that would apply also to the Council of the European Union. In addition, the Commission's current transparency measures only cover around 1-3% of its staff: for example, none of the lead negotiators for the Transatlantic Trade and Investment Partnership (TTIP) are covered by the transparency requirements. Finally, the lack of balance in the meetings held by the European Commission still needs to be tackled, after data analysis by leading NGOs has revealed that about 75% of the Commission's high-level meetings with lobbyists are actually with industry representatives, and mostly with very large companies and multinationals. The Green/EFA group will strive to ensure balance in our meetings and will ensure that relevant civil society groups are taken seriously as stakeholders in the decision-making process. Keeping a public record of our lobby meetings will help us, and our electorate, to objectively ensure that we do that. To find out more about what we publish, click below:

A summary of the current state of play on lobbying transparency in Europe can be found in our two-page press briefing:

To see lists of meetings between Green/EFA MEPs and lobbyists, visit Lobby Calendar: 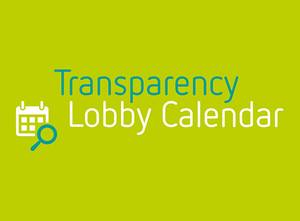