Working towards a summit on language diversity in Europe

EFA MEP Jordi Sebastià has hosted a seminar at the European Parliament to prepare for a Summit on Language Diversity in Europe, scheduled for December 2016.

A Protocol on Language Diversity, an effective tool supporting language equality and diversity in Europe, will be presented at the event. 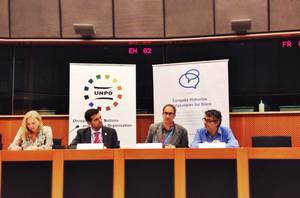 The project is a joint undertaking between the Unrepresented Nations and Peoples Organization (UNPO), Kontseilua, the Council of Basque Language Entities, and the Donostia/San Sebastian 2016 Capital of Culture Foundation.

These organisations set out the structure, objectives and achievements of the project, and the role that they foresee for States, international and transnational organisations, including the EU, at a later stage.

The project is part of the 2016 Donostia/San Sebastian European Capital of Culture.

Jordi Sebastià is Co-Chairman of the Intergroup for Traditional Minorities and National Communities and Languages of the European Parliament.