It is made up of 14 MEPs from 5 different political groups and includes EFA MEPs Jill Evans, Ian Hudghton and Tatjana Ždanoka who were founder members.

The group was established in 2006 to push for EU support for the peaceful resolution of the conflict in the Basque Country. 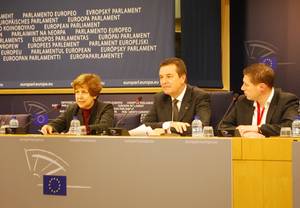 The re-establishment of the group was announced at a press conference in Brussels today, where the following statement was presented:

The Basque conflict is the last of its kind that remains unsolved within the borders of the European Union. The institutions of the European Union can and should support this process. However, the EU has not yet promoted, accompanied or assisted the resolution process effectively as would be expected, given its obligations and the direct appeal of the European Parliament in 2006.

We would like to recall that the declaration of support to the Basque resolution process adopted by the European Parliament in October 2006, calling on the European institutions and the member states to support the peace process in the Basque Country, is still in force and we will keep working so that what was then agreed is implemented.

That is why the Basque Friendship still has the same reasons and motivations to continue with its work, and is still committed to continue to work to build a just and lasting peace in the Basque Country.

We would like to announce that, after the elections in May, the Basque Friendship has been rebuilt by the reelected MEPs and has also added new members. Today, the group is composed of 14 members from 5 different political groups of the European Parliament. This gives us the strength and enough plurality to develop our work in an efficient manner. But we are not satisfied, and we think other members will join the group in the near future.

Therefore, during the current term, we will continue to develop and deepen the work done so far, trying to contribute as much as possible to a solution sustained in an inclusive dialogue and based on agreement, as well as on the respect for all human, civil and political rights.

Friendship members are convinced that the opportunity to address the causes and consequences of conflict in the Basque Country are still open wide, and we understand that European institutions should ensure that this historic opportunity isn't missed. It is necessary to move from words to deeds.

We would like to highlight the consensus reached in the Northern Basque Country to demand a comprehensive solution to the conflict, this consensus was presented on October 24th 2014. We believe it is a very important step on the road to peace that representatives of all political forces in the Northern Basque Country have signed a text addressed to the French Government urging it to talk to ETA and requesting the repatriation of all prisoners, as well as bail for sick prisoners.

We also consider the conclusions of the Social Forum for Peace June 2014 session, recently released by the International Contact Group as an important foundation on which the solutions to the issue of prisoners can be based.

The Friendship wants to show its willingness to continue to support these initiatives and help promoting them in European institutions, with the aim of supporting a comprehensive solution to the conflict in the Basque Country.

Commission refers Poland to ECJ over independence of Supreme Court

Defending Fundamental Rights in the EU: the Spanish case