The delegation from PEN International included its President, John Ralston Saul, and the author and President of German PEN, Josef Haslinger.

The manifesto, which has drawn the support of more than one thousand writers, was also signed by Günter Grass.

It calls for the establishment of a European fund to assist refugees who arrive in the EU, whilst also advocating a unified European approach so that refugees can expect the same treatment and legal protection wherever they arrive. 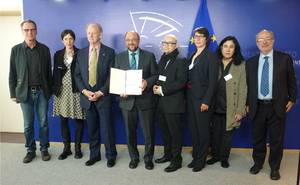 The initiative comes ahead of a conference organised in the European Parliament by the Greens/EFA Group on freedom in a time of crisis.

The conference is the first in a series organised by the Greens/EFA on freedom of speech in Europe today.

This first event focusses on writers and the challenges they face in Europe and around the world in the context of freedom of expression.

Josep-Maria Terricabras said: "I'm very grateful to President Schulz for listening to what we had to say. I hope that the EU will listen to our calls because a political and economic Union is hardly worthy of the name unless it's also a humanitarian union."

Author and President of PEN International, John Ralston Saul said: "The question of borders matters, but lives matter too. We think that Europe is a welcoming place and it needs to be a welcoming place for refugees and we believe there should be a European Fund created so they can be treated in an equal manner across Europe".

Josef Haslinger said: "The protection of refuges is a common obligation for the European Union. What really disturbs us is the completely different standards of asylum in different countries and regions".

He said: "This is a call that we take very seriously in the European Parliament. I thank my colleague Mr. Terricabras for organising this initiative, which is exceptionally important.

"Last week I visited a refugee camp on the Turkish-Syrian border and I must admit that I was ashamed at how EU member states are shunning their responsibilities and applying international standards of solidarity and respect."

He also accepted the manifesto as an opportunity to honour the great contribution of Günter Grass to European culture.

Expansion of Frontex should only happen with stronger fundamental rights