A hearing to consider the case of imprisoned Ukrainian journalist and blogger Ruslan Kotsaba will take place in the European Parliament on Tuesday 26 January from 14:00 to 15:30 in room ASP 5E1, organised by Latvian MEP Tatjana Ždanoka.

The Ukrainian journalist, blogger and Maidan activist Ruslan Kotsaba is being prosecuted for "Betrayal of the Motherland" because of his reports on the conflict in the Donbass area. 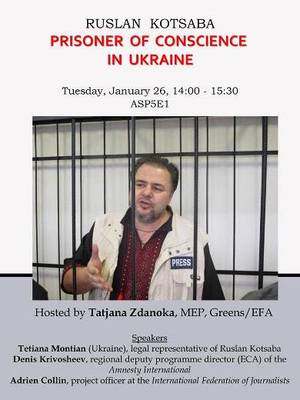 He has also made a public appeal against conscription. Kotsaba was arrested in Ukraine in February 2015, and his pre-trial imprisonment is regularly prolonged.

Two days after his arrest, on 9 February 2015, Amnesty International called upon the Ukrainian Government to free the journalist and described Kotsaba as a prisoner of conscience.