EU quotas for Women on boards not enough

Today, members of the European Parliament debated and adopted the Directive on Gender balance among non-executive directors of companies listed on stock exchanges (Women on Boards). Since the directive was proposed by the Commission in 2012 it has been blocked by the Council, until earlier this year. While the Greens/EFA Group welcome that there is finally going to be a directive including quotas for women as board members, the fact that the final text has only similar ambitions, to the text first proposed a decade ago is disappointing.

“At last, the EU has managed to agree on quotas for women on boards. This directive is long overdue. Setting EU minimum standards for the percentage of women in the top positions in publicly listed companies is more than just symbolic. Women in top positions today will pave the way for girls tomorrow. We know that having role models that children can relate to is crucial for kids' to have big dreams and see that it is actually possible to realise them. But this is not just a gender equality issue. Research also shows that having a diverse makeup of executive and nonexecutive boards makes companies more resilient and profitable."

“However, the final text of the Directive is lacking in ambition. The fact that very little in the text has changed since its first proposal in 2012 is telling. There are too many loopholes for companies to be exempt from the regulation, including a suspension clause for Member States. The Greens/EFA Group will continue to fight for gender equality in companies as well as all other sectors. In particular, we will closely follow the implementation of the directive in the Member States, and if the percentage of women on boards increases in a way that is acceptable, we will continue to push for higher ambitions."

“Today we celebrate a major milestone in promoting gender equality in business. The Women on Boards Directive is the first time that binding targets are set for gender balance among non-executive directors on publicly noted company boards. It has been long in the making, and a change of government in Germany was needed to finally break the deadlock in the Council.”

“However, this is just the beginning. The review clause in the directive, that the Greens/EFA called for, creates possibilities for more ambitious targets, and to extend the scope to cover unlisted companies. The impacts of this legislation need to be carefully monitored to ensure that we effectively tackle structural discrimination in business. Everyone must have an equal opportunity to advance to leadership positions based on their abilities and regardless of gender.” 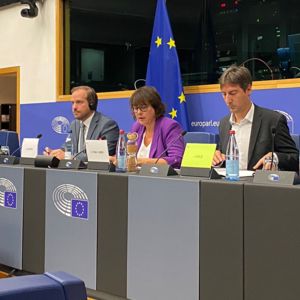