The European Parliament today adopted a report on the negotiations of the EU-Azerbaijan and EU-Armenia Association Agreements. The Greens/EFA group succeeded in making it clear in the report that increasing economic relations between Azerbaijan and the EU must go hand in hand with greater respect for human rights.

"The protection of press freedom and freedom of assembly, as well as other human rights, must not be forgotten as we grow closer with Azerbaijan.  We saw only yesterday in the case of democracy activist Leyla Yunuz that intimidation by authorities against critical voices in the media and civil society continues. These actions must be addressed and condemned."

In line with the EU's Eastern Partnership program, the report supports the objective to promote democratic reforms in Azerbaijan and supports civil society significantly.

"We must not forget the efforts of Azerbaijan's activists to reform their country. It is right that in this report that we highlight and criticise the house demolitions, evictions and human rights violations in connection with the construction of the Crystal Hall in the Bay of Baku for the Eurovision Song Contest in late May. (1) Last month I invited human rights activists from Azerbaijan to discuss these and other violations and I am pleased that their reports have not fallen on deaf ears. 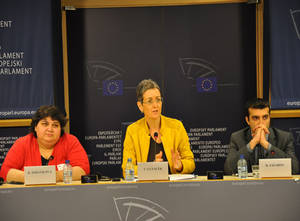 This regional policy approach also includes the demand for a settlement of the conflict between Azerbaijan and Armenia over Nagorno-Karabakh which is still a dangerous source of instability in the South Caucasus.

The strong military build-up in both countries raises grave concerns. The report calls on the leaders of Armenia and Azerbaijan to act responsibly, and tone down statements and avoid inflammatory declarations. But in addition to this verbal disarmament, it also urges a much needed military disarmament policy. The first steps are clear and referred to in both reports: the parties must sign and ratify the international landmine and the cluster munition conventions. In this respect the EU Member States are strongly requested to stop supplying weapons and munitions to both countries.

(1) Further information can be found on www.singfordemocracy.org