Landrush : The Sellout of Europe's Farmland 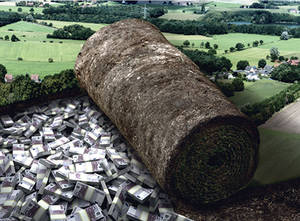 We need to come back down to earth in Europe. Agriculture is losing its farmers. The European model of small-scale farming is at risk. There is a gradual process of land concentration that is undermining small-scale farming, and consequently, putting the future of a diverse and sustainable cultivation of our land at risk. Farmers are increasingly losing the ground they are working on.

Modern land grabbers, often corporations, acquire land, betting on the future increase of prices for food and raw materials. What is threatening about this process is that there is hardly any public awareness of it and reliable data on these developments is scarce. This urgently needs to change.

The rush for land in Europe has a different character than, for example, in Africa. Generally, land concentration in the EU takes place legally. But there are considerable differences between EU Member States regarding the distribution of and access to land. Nowadays, almost everywhere, farmers who want to survive need to continue to grow, and to do so they need to get their hands on more land. Anyone intending to enter the agriculture business barely stands a chance unless they inherit land from their parents. Land has increasingly turned into an investment opportunity and an object of speculation and is no longer primarily the basis of small-scale farming.

At the same time, agriculture is becoming more intensive and farms are getting bigger. This is a threat to biodiversity, the groundwater, our rural social structures, and the quality of food.

Soil, meadows, pastures, and arable land are not commodities but the livelihood of farmers. Acting responsibly means treating the land with care, increasing soil fertility, and securing equitable access to land for those who live on it. Therefore, the distribution of and access to land are socio-political issues that need to be governed by democratic decision-making processes, not by the stock market. Land is not simply a commodity!

In this study we outline the current developments in the new rush for land in Europe by taking several countries as examples. We have also compiled possible approaches for action.

With this study I would like to raise awareness and initiate a new way of thinking about our land, not only in Germany, but in the whole of Europe.