However, after voting by an overwhelming majority on a series of proposals to reform the Commission’s ethics system, yesterday’s vote smacks of double standards as key reforms to the ethics rules that seek to avoid conflicts of interest of MEPs were voted down.

In the run up to this vote, we prepared a number of proposals or “amendments” that were supported by over 100 MEPs from across the political spectrum. Not all of them were adopted in the end, however, mostly due to the voting behaviour of the conservative EPP group, the liberal democrats in the ALDE and the S&D group.

It is worth noting that all changes to the Parliament’s rules of procedure have to be adopted by an absolute majority - which requires at least 376 votes in favour. This explains why, for example, despite the fact that a majority of MEPs voted in favour of listing their lobby meetings, the proposal was not adopted in the end because it did not receive 376 votes. A vote of this kind also means that abstaining on a particular topic is similar to voting against it, because it minimises the chance that a 376+ majority can be reached.

This article outlines the key transparency and ethics issues and how each of the groups voted on the Greens/EFA transparency amendments.

On the conflicts of interest of EU Commissioners:

Pascal Durand, one of the leaders of our Greens/EFA transparency team, managed to push for better checks on the potential conflict of interests of Commissioners; both at the beginning of the legislature and in case of a major portfolio change. Read more about it here: http://www.greens-efa.eu/european-parliament-adopts-new-measures-to-control-conflicts-of-interest-in-the-european-commission-16299.html

A number of improvements on the transparency and regulation of lobbying were also included, notably because they were supported by the S&D rapporteur, Richard Corbett:

Our amendments on transparency of lobbying were broadly supported, as shown in the table below: 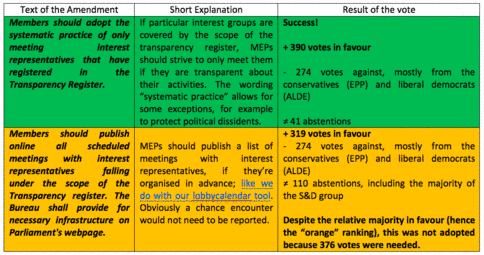 These votes are critical because, next year, the European Parliament, Commission and Council will begin negotiations on a new lobby register, with the aim of making it as mandatory as possible. To achieve this, the Commission has proposed that MEPs no longer meet with unregistered lobbyists. There is no mention of the publication of meetings in the Commission’s proposal, but our objective is to introduce it - hopefully there will be a majority for that, given the results of the vote above!

On the legislative footprint:

We also tabled an amendment to ensure that written input provided by lobbyists on European Parliament reports or legislative files should be collected and published in order that there be oversight of how decisions are taken, and accountability over who decided what, and why. However, this proposal was rejected, with 242 voting in favour (mostly from Greens/EFA, ECR, GUE and EFDD) and 403 voting against (the larger groups: EPP, S&D and ALDE) with 59 abstentions.

On the side jobs of MEPs:

Ideally, we would have wanted much stricter regulation of MEPs’ side jobs, because we believe that representing citizens and defending the public interest is a full time job. However, this was a red line for many other parties, particularly the conservative EPP, which claimed that limiting MEPs’ freedom to have a job on the side was a violation of their right to a career.

This meant that, in the end, the proposal adopted was limited to prohibiting MEPs from acting as paid lobbyists at the same time as they purport to defend the general public interest. So, we tried to at least table an amendment that would oblige MEPs to be transparent about who their clients are when they work as “consultants” or “lawyers”. As you can see by the drafting of the amendment below, even this was controversial; and in the end, it was voted down.

The Parliament did, however, vote to ensure that a more detailed breakdown of MEP’s financial interests will now be required (though it rejected our amendments for transparency of MEPs’ property and debt), plus there should be improved checks to make sure that declarations of financial interest are kept up to date and accurate (you may remember the scandalous declaration by a Danish MEP in the previous term, who claimed he was “master of the universe” - this was only discovered thanks to research by  Friends of the Earth Europe, which highlighted the total lack of control by the Parliament of what MEPS’ included in their declarations.

On the revolving door:

A new obligation was introduced which now ensures that former MEPs have to notify the European Parliament if, after leaving office, they take up a new job as a lobbyist. We wanted to make sure that this weak proposal would at least be enforced, so we tabled the following amendment, which was not adopted:

We also proposed the introduction of a cooling off period for MEPs, so that, as long as they are receiving EU funds (they are entitled to a transitional allowance after they leave office), they should not exploit their previous know-how and insider contacts to the benefit of a particular lobby group. This was so controversial, that Parliament President Martin Schulz managed to remove this amendment from the proposal before it could even be voted on. He claimed that the EU Parliament has no competence to regulate the private lives of MEPs after they leave office.

Improving the functioning of the advisory committee on ethics:

From now on, the European Parliament President will no longer be able to block the ethical Advisory committee from investigating cases where MEPs are suspected of having broken the Code of Conduct. This is due to a slight change in wording which now reads that the President Parliament “should” forward any alerts to the advisory committee on ethics, rather than “may” forward the alerts. Legally speaking, there is technically a difference, but we believe that much more far-reaching reforms are urgently required.

For example, we believe that the ethics advisory committee should be composed of external experts, instead of being filled with MEPs, who would then be judging their own colleagues, but this was rejected by a large majority (526 against, 150 in favour, 28 abstentions). It was only by Greens/EFA, GUE and EFDD.

See below for more: 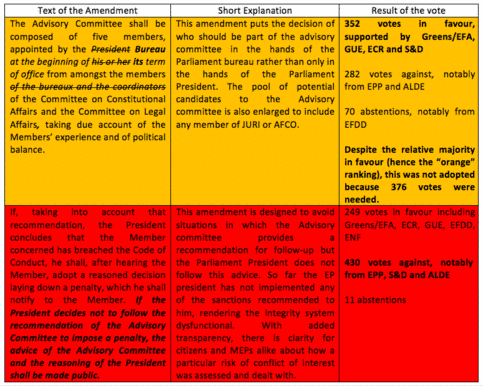 Trilogues are notoriously opaque processes as they are basically informal negotiations between the three EU institutions: Council, Commission and Parliament, on legislative files. They are now a regular part of the decision-making process because it speeds up the adoption of legislation. However, this makes it very difficult for citizens, NGOs and smaller political groups to follow, and these documents are often not published because it is claimed that they are particularly sensitive. 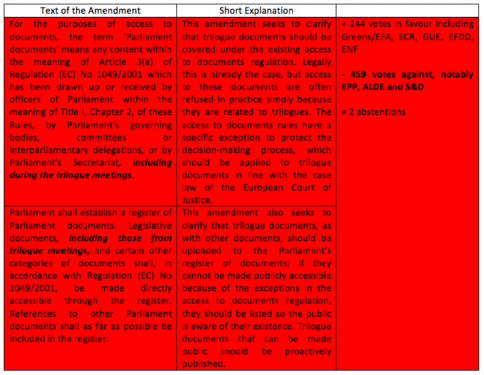