A roadmap for peace in the Basque Country?

The European Parliament's Basque Friendship Group, and the Greens/EFA group hosts a conference to discuss the outcomes of the Aiete conference, and the prospects for building a lasting peace in the Basque Country.

Our event will hear from Jonathan Powell, one of the endorsers of the Aiete declaration, and formerly the chief of staff to the UK Prime Minister, who played an important role in the peace process in Ireland.

The conference is likely to consider the role of the European Union and the European institutions including the European Parliament in supporting the ongoing peace process and resolution of Europe's last armed conflict.

The conference will be followed by a press point at 11am 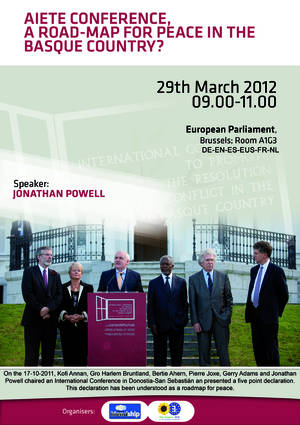 Negotiations must be conducted in good faith

The European Union must evolve

EU governments must wake up