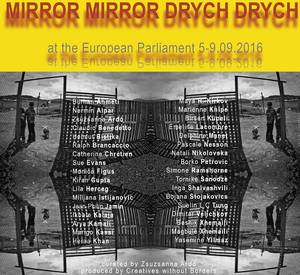 The Greens/EFA and Creatives without Borders present Drych Drych – Mirror Mirror, an international art exhibition exploring how collective memory and perception endures through attitudes towards 'the Other’.

Curated by Zsuzsanna Ardó, the exhibition was featured 5-9 September at the European Parliament, supported by SynergySync Arts, and sponsored by Jill Evans MEP. 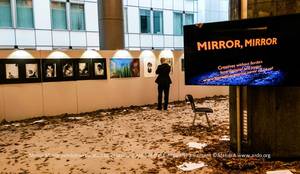 Taking its title from the eponymous poem Mirror Mirror – most recently translated into Welsh – the exhibition brings together film, poetry, new music, installation and paintings, all interpretations of the theme, and a stunning photography essay of Romani life by Zsuzsanna Ardó, published by The Guardian. 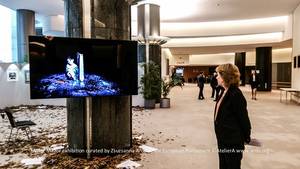 Earlier editions of Mirror Mirror have been featured at the British Parliament, Boz’Art en Baz’Art Festival France, and Drych Drych at the Welsh Assembly.

Exploring different aspects of the theme, three poems by Zsuzsanna Ardó, set to music by composers in the US, premiered at this European Parliament arts event: Mirror Mirror by Jonathan David, performed by Concentus Carolina; Pitter Patter, Pitter Patter, and Then by Daniel Andor-Ardó, performed by the C4 Ensemble: The Choral Composer/Conductor Collective; Ultramarine and Sienna – Dumas’ Riposte by Toby Twining, performed by the Grammy Award-winning Roomful of Teeth.