Subject: Food Security in light of Russia’s war in Ukraine and Strengthening the Farm to Fork Strategy

The war launched by Vladimir Putin against Ukraine has already claimed an unbearable number of victims. It is crucial that everything be done to protect the security of the country and its inhabitants, and we welcome your willingness to commit the European Commission to this endeavour, which we share and support.

No one can deny the major consequences that this war will have not only on the people there, but also beyond, in Europe and across the globe. With regard to food security our production and consumption of foodstuffs depends largely on Ukrainian and Russian exports. Even before the Russian invasion, global agricultural markets have seen a rise in prices, which will be compounded by the war in Ukraine. At the beginning of March, wheat came close to 400€ per ton, almost 100 more than during the food crisis of 2008.

Like you, we are concerned about the threats that this conflict poses to food security. We know that emergency measures must be taken to avoid a food crisis, which could destabilize entire regions. Our responsibility is therefore to make sure that no one is left behind.

For the Greens/EFA Group, the war in Ukraine and the associated geopolitical repercussions are a reason to strengthen our commitment to the European Farm to Fork and Biodiversity strategies, as they are crucial to the future and the sustainability and security of our food system.

It is in this context that we want to raise our deep concerns with current discussions  on the re-evaluation of elements of the Green Deal dedicated to agriculture, and in particular the Biodiversity and Farm To Fork strategies that risk fundamentally undermining progress in these areas. EU ministers have focused on the Ukraine crisis to call for a review of our objectives for the greening of agriculture, and even some “green” rules of the just adopted CAP regulation. These essential components of the Green deal are at the core of the European Union’s strategy to meet its climate commitments in the medium and long term, and there is no evidence to suggest lowering ambition at this time will lead to better food security or sustainability in the long run.

These two strategies will allow us to reduce our dependence on synthetic inputs, which are largely manufactured using Russian gas, and thus build our food and political sovereignty. The energy sector is undergoing a total transformation to preserve our energy independence; this should also apply to food and agriculture.

Moreover, by delaying action on climate and biodiversity goals, we increase the risks on the long run. The IPCC report tells us that one third of the world's agricultural land will be unfit for farming by 2100.

This is why we are asking you to reaffirm the European Commission's commitment to stay the course of the EU Green Deal, and to implement the Biodiversity and Farm to Fork strategies.

The European Union should supply sustainable solutions to guarantee food security, now and for future years, without giving in to the demands of lobbies that put the resilience of our food system at risk. There is room for short-term measures, and we would be happy to contribute to them, but the European Union also has the responsibility to the environment, its citizens and the rest of the world to safeguard long-term action and secure the future of our food system. 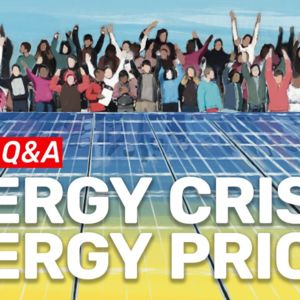