Today is International Anti Corruption day, a UN sponsored day that aims to raise awareness and call for action in the fight against corruption. Last year, we published a series of proposals for how ethics, transparency and integrity needed to be improved in the EU institutions, as well as a list of ways in which we were working to achieve those goals. 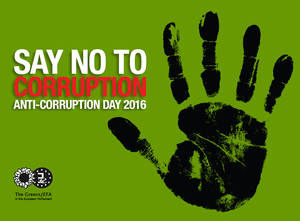 This year, we take the opportunity to look back on what has been achieved so far, and where further action still needs to be taken. We call on all interested citizens, journalists, NGOs and decision-makers to join us in the fight to eliminate conflicts of interest and opaque decision-making so that the EU institutions can really serve to defend the public good.

Own initiative report on transparency, ethics and integrity in the European Parliament

Our report, drafted by Greens/EFA MEP Sven Giegold, has still not been voted on due to the blockade by the other political groups, notably by the conservative EPP, who at the last minute proposed to postpone any voting on the report until after the Parliament’s new rules of procedure were adopted. Clearly the strategy was to avoid any of the recommendations contained in the report from actually being transposed into legally binding obligations. Naturally, we were not about to give up. So the battleground for more transparency shifted towards the rules of procedure of the EU Parliament, which sound dull but are in fact crucially important because they also lay down ethics rules that are supposed to avoid conflicts of interest. Next week the European Parliament will vote on the rules of procedure and on changes to their ethical obligations. We managed to gather together a cross-party group of around 100 MEPs that have signed amendments to:

All these changes must be approved by an absolute majority and the vote will take place next week in Strasbourg. But it remains to be seen whether or not the majority of elected politicians will actually want to improve transparency and integrity rather than just talking about it – we will make sure to request a public vote, so watch this space!

Conflicts of Interest in the European Commission

Over the past year the Commission has given us a lot of extra work. Commissioner Cañete’s wife was named in the Panama Papers and there was no real process for holding him to account, Barroso caused outrage over the summer when he moved through the revolving door to work for Goldman Sachs, ex-Commissioner Neelie Kroes was listed in the Bahamas Leaks as the director of a company which she failed to declare, and Commissioner Oettinger was caught flying in the private jet of a high profile lobbyist, a meeting that he should never have had since the lobbyist is not even listed in the EU transparency register. In response to the growing scandals, thanks to the Greens/EFA group the European Parliament voted to freeze 20% (around half a million euros) of the budget used to pay ex-Commissioners a “transitional allowance” for three years after they leave office. The condition for releasing the budget reserve was to get a stricter code of conduct for Commissioners, including a longer cooling off period of at least 3 years. The budget reserve was pushed off the table during the three-way negotiations between the European Parliament, Council and Commission but the political signal sent by Parliament was strong enough to kick the Commission into action: President Juncker has now proposed to extend the cooling off period for former Commissioners to 2 years and for the Commission President to 3 years. This is of course welcome, but much more drastic reforms are urgently needed. So, the Greens/EFA group drafted an own-initiative report led by Pascal Durand MEP, which was adopted practically unanimously by the European Parliament and which not only proposes a series of improvements to the current system for Parliamentarians to oversee the conflicts of interest of Commissioners but also calls for a serious reforms to the European Commissioners’ rules on ethics. Once the changes are adopted into Parliament’s rules (rules of procedure) early next year, we should be able to overcome the lack of accountability so far of EU Commissioners when they violate their ethical obligations. The ball is now clearly in the Commission’s court to overhaul its ethics system.

A new lobby register is due to come into force, after the European Commission published a proposal for reform in September this year. The Commission has proposed that, in order to make the EU lobby register as mandatory as possible, MEPs should not longer meet with lobbyists that have failed to register their activities. It also proposes to include the Council in the register’s scope. Currently both the Council and the Parliament are working on their negotiation positions, and it is expected that meetings between the three institutions would begin around March next year. The Greens/EFA group, as usual, will be pushing for the highest lobby transparency standards possible. Help us! Since members of the Greens/EFA group started publishing their lobby meetings this time last year, we have recorded over 1,250 meetings with stakeholders. Check them out here: https://lobbycal.greens-efa-service.eu/all/

This campaign is quickly bearing fruit! After the adoption of the trade secrets directive, which the Greens/EFA group was against from the beginning and which generated huge opposition from trade unions, journalist organisations and NGOs because of the disproportionate powers granted to companies to keep swathes of information secret, the campaign to protect whistleblowers across Europe has gained huge momentum. After presenting our proposal for what a Directive to protect whistleblowers could look like, the Parliament is working on 2 own-initiative reports on the matter, the Council (composed of the Ministers of Finance) has publicly called for action to protect whistleblowers and the European Commission has promised to launch a public consultation next year as well as an impact assessment. While we are far from screaming “victory!”, the fact that the political tide has changed so quickly is a cause for some celebration. You can join this campaign by:

To ensure that wrongdoing, corruption or illegal practices within the EU institutions or related to EU decision-making is exposed and remedied, 12 Members of the Greens/EFA group launched a secure online platform which allows whistleblowers to send us alerts anonymously, protecting them from being traced by using a special (TOR) browser. Since we launched the platform at the end of September we have received four alerts, which we are in the process of handling. We have also enacted our own internal guidelines for whistleblower protection so that new staff joining the greens/EFA group have clarity over what their rights and responsibilities are if they come across any wrongdoing within the group.

Last year, the European Parliament adopted strong language calling for “full transparency regarding the General Expenditure Allowance” which is a monthly €4000+ pot for paying office costs. It also asked the bureau of the Parliament to revise the list of expenses that can be paid by the General Expenditure Allowance in order to avoid any confusion. We are still waiting for the Parliament to enact these measures.  So, a lot has happened over the past year but there is still a lot of work to do! Join us in the fight to protect whistleblowers, improve lobby transparency and fix the broken ethics systems in Europe. And if you have ideas for what we should focus on in 2017, just write to pamela.bartlettquintanilla@ep.europa.eu

Time to guarantee ethics and integrity in the EU