or how to make it difficult to propose a new law

Tomorrow, the Committee on Constitutional Affairs will discuss the draft report on the conclusion of an Interinstitutional Agreement on Better Law-Making between the European Parliament, the Council of the European Union and the European Commission. The Council and the Commission have already approved the agreement. For the Parliament, the Conference of Presidents has already agreed to it, but the plenary still needs to vote on it, based on the committee report. 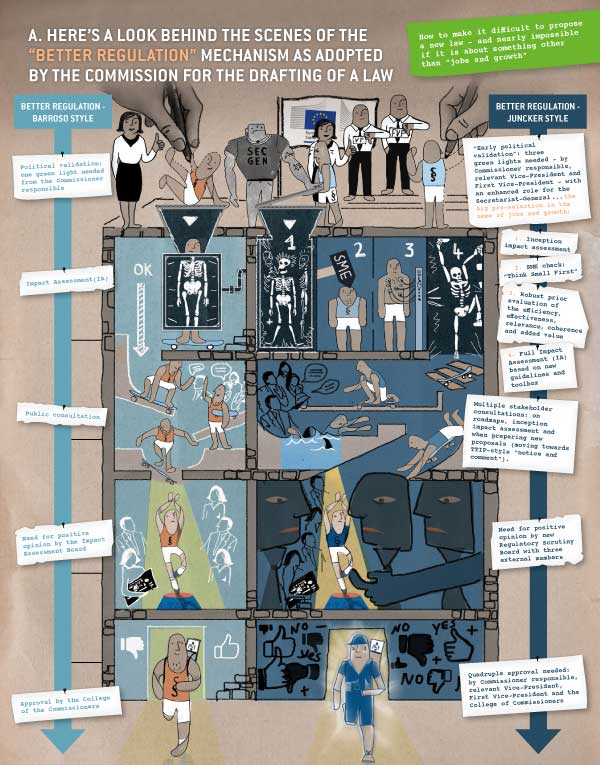 In May 2015, the European Commission presented and adopted the ‘Better Regulation’ package. It is the centre-piece of its new agenda to change what the Union does, and how it does it. The package can be broken down into two major parts: one with regard to the changes brought upon the upstream work of the Commission when preparing a new law, and one with regard to the legislative work with the Council and the Parliament once the Commission has adopted a proposal for a new law. The first part is the sole responsibility of the Commission, took the form of a communication and various decisions,  and is status quo since May 2015. The second part took the form of a proposal for an Interinstitutional Agreement.

Infographic A: "Here's a look behind the scenes of the "Better Regulation" Mechanism as adopted by the Commission for the drafting of a law

Following the restructuring of the Commission, ‘Better Regulation’ is meant to ensure that only the ‘big things’ that contribute to the ten priorities of President Juncker’s Political Guidelines will be tackled. To do so, the Commission established all kinds of new procedures in the name of ‘Better Regulation’ for preparing new laws. Political control will be exercised right from the beginning, impact assessment procedures strengthened, new evaluations added, consultations multiplied. Together with the new structure and the new working methods, it is both a centralisation of power in the hands of a few as well a bureaucratic nightmare. In reality, ‘Better Regulation’ with regard to the Commission's internal preparatory work stands for ‘Better internal controls for less Regulation’. And this sad reality applies since May 2015.

Infographic B: "Here's a look behind the scenes of the "Better Regulation" Mechanism as proposed by the Commission for the legislative process

Having controlled its own house and established ‘Better internal controls for less Regulation’, the European Commission wanted to ensure that the co-legislators – the Council of the European Union and the European Parliament - also play along. For that reason, they proposed a revision of the inter-institutional agreement on better law-making. With this new agreement between the three institutions, the Commission sought better control over the legislative process both in time and in substance. Above all, the Commission wanted to make it more difficult for Council and the Parliament to make changes to the laws it had proposed. The co-legislators should oblige themselves to do impact assessments for substantive changes – and all institutions should be entitled to call upon an ‘independent panel’ to evaluate all kinds of things prior to the adoption of an agreement.  In summary, Council and Parliament should hurry to work on Commission priorities - and be straightjacketed if they wanted to deviate from them. In this context, ‘Better Regulation’ actually stood for ‘Better controls of the co-legislators for less Regulation’. Council and Parliament rejected this power grab.

Overall, "Better Regulation" is both a major power grab (partly failed), a "jobs and growth" filter at the expense of the protection of health and the environment, and a means of deregulation. It is favouring the interests of large corporations, and is also meant to please certain Member States, in particular the United Kingdom.