EFA MEPs joined colleagues from the European Free Alliance political party to celebrate the formation of a pro-independence government in Catalonia.

The Catalan parliament met on Sunday to elect a new head of government, just hours before the deadline for doing so.

This follows elections in Catalonia on 27 September which saw pro-independence parties win a majority of seats. 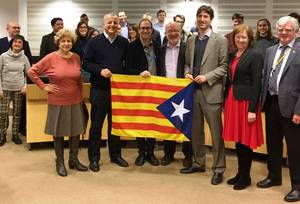 Newly elected President of Catalonia, Carles Puigdemont, has said that Catalonia now moves from a state of post-autonomy to pre-independence.

It's reported that over the course of the parliamentary term, preparations will be made for a Catalan constituent assembly, laying the foundations for an independent Catalonia.