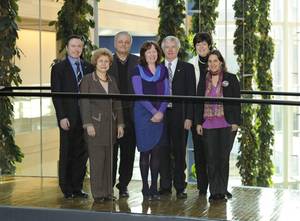 Responding to increased interest in our work for Europe's stateless nations and regions in the European Parliament, the EFA Group has launched a new website.

Find out more about the work of the European Free Alliance in the European Parliament at www.efa.greens-efa.eu

The EFA Group organised a study visit to Aberdeen and North East Scotland at the end of June. Key themes of the visit were energy, coastal communities and, of course, constitutional issues.

We were welcomed to the 'granite city' by local Scottish Parliament member Maureen Watt and SNP President Ian Hudghton MEP and reminded of Aberdeen's importance internationally as a major centre for the energy industry, particularly oil, and as a world class centre of learning and innovation.

Oil and gas and the wider petrochemicals industry are hugely important for the Scottish economy, supporting almost a quarter of a million jobs. Nearly a fifth of all corporation tax received by the UK Treasury is generated by the industry, highlighting for many the injustices of the current constitutional set-up.

We visited the historic town of Arbroath which highlighted the strong seafaring traditions of the region and the importance of fishing and shipping in particular. The town is perhaps most famous for its Abbey, site of the signing of Scotland's first declaration of independence in 1320. This early declaration of Scotland's freedom and of the sovereignty of its people would go on to inspire generations of patriots, and is widely held to have inspired the American declaration of independence centuries later.

At Arbroath harbour we were reminded of the challenges faced by Scotland's fishermen, and of the particular threats to the industry's survival posed by the EU's controversial CFP (Common Fisheries Policy). CFP reform is currently underway; widely seen as a failure, there are growing demands for Europe's fishing nations to win back control over fisheries from Brussels.

Our visit to the Scottish European Green Energy Centre (SEGEC) at Aberdeen University brought home the major emphasis placed on developing renewable and sustainable energy by the Scottish Government. Scotland is undertaking pioneering work to develop tidal, wind, hydroelectric and other forms of green energy. SEGEC works to take this forward and help viable green energy projects find European funding. Scotland already produces 35% of its electricity from green energy sources and the Scottish Government has set a target of 100% by 2020.

Rejection of the controversial ACTA anti-counterfeiting treaty by the European Parliament was welcomed by EFA MEPs, who voted against the agreement.

There were widespread civil liberties concerns related to the now doomed treaty and fears that it would do more harm than good in efforts to deal with copyright infringement in Europe. In particular, some of its provisions would have curtailed internet freedom, and led to the arbitrary denial of internet access without a proper legal process.

ACTA (Anti-Counterfeiting Trade Agreement) was a multinational treaty between the European Union, the US, Australia, Canada, Japan, Mexico, Morocco, New Zealand, Singapore, South Korea and Switzerland. It's stated aim was to strengthen the enforcement of intellectual property rights and combat counterfeiting and piracy of goods including music and films, but is has attracted widespread opposition from civil liberties groups.

The European Parliament had to give its consent in order for the agreement to enter into force.

Commenting after the European Parliament rejected ACTA, Jill Evans, President of the EFA Group, said: "Adopting the ACTA agreement as it stands would have done more harm than good on several levels. Tackling serious cases of copyright infringement is important, but ACTA would actually have undermined efforts to achieve this at EU level. There were also very serious concerns about civil liberties, and the negative impact on internet freedom, as well as the potentially heavy handed approach with everyday users of copyright material."

SNP MEP Alyn Smith agreed and commented: "I am delighted we have said goodbye to ACTA once and for all. The aim of the ACTA agreement was to strengthen the enforcement of intellectual property rights and to help to combat counterfeiting and piracy of goods such as clothing of luxury brands, music, and films. All of this is a worthy enough aim, but ACTA ignored what it was designed to achieve. We need to see improvement in the area of copyright and patent enforcement without the impairment of civil liberties and access to information and medicines."

Flemish nationalist Frieda Brepoels agreed: "It's clear that having an effective global approach to intellectual property rights is crucial for economic competitiveness. Billions of euros are lost annually in Europe due to fake products and piracy. Sadly, ACTA was not the right solution to these problems. We need a global approach that includes all of the key players, not just those countries that already have a fairly good record on intellectual property protection, as was the case with ACTA."

Latvian MEP Tatjana Ždanoka also welcomed Parliament's decision to reject ACTA, commenting: "I was pleased to vote against this Treaty and I'm sure we made the right decision in rejecting it. Those pushing forward this ill-conceived agreement completely underestimated the level of public opposition and hostility, not just to ACTA itself, but the way it was put together. We saw this opposition first hand in the Parliament's Petitions Committee and I'm pleased to note that the very first petition to be submitted to us opposing ACTA came from my own country, Latvia."

MEPs Frieda Brepoels from Flanders and Jill Evans from Wales backed calls from EU parliamentarians for improved and updated EU laws on animal welfare. They want the European Commission to bring forward a proposal for a legal framework on animal welfare as early as 2013, as well ensuring better controls and communication.

Frieda explained: "The compliance of existing legislation on animal welfare is a real problem and needs to be dealt with as a matter of urgency. Animal transport is a case in point. It is primarily the role of the relevant authorities in the member states to operate proper controls, but the European Commission must be able to adequately undertake unannounced inspections in order to check for possible violations."

Jill added: "The EU spends €150 million a year on animal welfare, and yet standards are still not good enough. One of the main issues is problems with enforcing current rules. The strategy proposes to establish a better system at an EU wide level to check whether countries are on track to meet deadlines. Another positive element is that the strategy urges that animal welfare standards are included in trade agreements. Imported animals should have been reared to equivalent standards as European ones."

Plaid's Jill Evans backed a campaign to improve welfare standards for dairy cows in Europe. 'Supporting Better Dairy' also has the backing of Compassion in World Farming, the World Society for the Protection of Animals, and the founders of Ben & Jerry's Ice Cream. Together they launched a European Citizens' Initiative to collect a million signatures calling for new legislation to improve welfare standards for dairy cows. They are one of very few species of farm animal in Europe not covered by specific legislation.

Jill attended the launch in Brussels and said: "I have the impression that consumers and producers are broadly supportive of this campaign. With so much focus on how our food is produced and where it comes from, it will come as a surprise to many that dairy cows aren't protected by specific legislation. This needs to be put right and I'm pleased to support this initiative. I would urge people in Wales who are concerned about animal welfare to sign up in support of this campaign."

Galician nationalist Ana Miranda took to the floor of the European Parliament to raise concerns about recent developments in Paraguay. The country's democratically elected President has been deposed in a controversial move by the country's Congress.

Speaking in Parliament, Ana said: "We want to condemn and express our deep concern for the coup d'état against Paraguay's sovereign and democratically elected President. He was deposed following a political trial set-up in Paraguay's Congress, controlled by the conservative opposition, which failed to adhere to democratic norms and offered the President little time to organise his defence. His dismissal has no legitimacy and failed to respect due process and the right to a proper defence. Instead, the will of the people has been manipulated following their decision to change direction politically after years of dictatorship and right wing domination.

"We have to call things by their proper name. What has happened in Paraguay is a parliamentary coup d'état. This has been widely condemned and the European Parliament must add its voice to the condemnation."

EFA MEP François Alfonsi's report on a new strategy between the EU and the countries of the Mediterranean was widely supported by the European Parliament. It calls for greater macro regional strategies, particularly in the Mediterranean region.

Alfonsi commented: "We need to improve the effectiveness of EU policies providing an overview and strengthening synergies between the regions and states, and between the various development tools of the European Union, such as the EIB, or even neighbourhood policies and pre-accession. A strategy in the Mediterranean is justified, particularly since there are as many difficulties on this side of the Mediterranean as there are on other shores.

"The macro-regional strategy builds on existing budgets without creating new budgetary demands. But rather than new funding, what's needed are new projects. The macro-regional strategy is likely to give rise to projects that will have real local involvement, be that institutional, or involving Member States, regions, and others, and through multi-level governance. I therefore call on the European Commission and the Cyprus Presidency to encourage the emergence of a strategy for the Mediterranean in the coming months ".

Backing for eCall in new cars

The European Parliament has recommended that all new cars in the EU should be fitted with the eCall system by 2015. This is an IT device that automatically calls the emergency services for help in the event of an accident. It's hoped that this will lead to a shorter response time and a cut in fatalities and injuries.

Flemish nationalist Frieda Brepoels welcomed the proposal: "Forty thousand people lose their lives on Europe's roads every year. eCall has the potential to reduce the number of victims. But of course this certainly doesn't take away the role of the EU and the proper authorities in the member states in accident prevention and promotion of transport safety."

Conflict between Parliament and Council

Frieda Brepoels was interviewed on Flemish Radio Een about the ongoing series of conflicts between the European Parliament and the Council. This has been seen on a series of recent issues such as reform of patent law - which had to be removed from the plenary agenda despite widespread popular support - as well as the ACTA treaty and the Schengen passport free travel area. Frieda expressed concerns that the Council was trying to sideline the democratically elected institution.