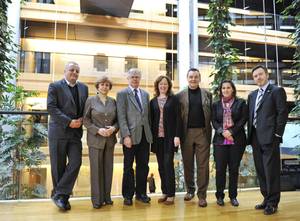 After years of negotiation, political agreement on a reformed Common Fisheries Policy was finally reached between the Irish Presidency and the European Parliament in the early hours of 30th May.

The agreement largely reflects the deal approved by ministers at the Council meeting of 15th May.

If this agreement is approved by the Committee of Permanent Representatives of the Member States, it will then need to return to the European Parliament for a final vote before becoming law.

SNP President and MEP Ian Hudghton is a member of the European Parliament's Fisheries Committee who has been campaigning for many years for reform of Europe's fisheries policy that will benefit the fishing industry and improve sustainable fishing.

Commenting earlier this year on the initial agreement, Mr Hudghton lamented the failure of EU fisheries policy over many years. Ian said: "The existing CFP is completely discredited and the ongoing reform is vital for our coastal communities. The one-size-fits-all centralised approach has failed our fishermen and failed Europe's fish stocks.

"By returning decision-making closer to home we can tailor fisheries management for local circumstances, bring about an end to discarding and ensure that Scotland has a thriving fishing industry for generations to come."

EFA Group President Jill Evans expressed her disappointment at the European Parliament's failure to adopt a strict target for renewable energy use in Europe by 2030.

MEPs were voting on a report in Strasbourg in mid May setting out their position on Europe's renewable energy policy.

Jill and her colleagues had been calling for an ambitious target of 40-45% of energy from renewable sources by 2030, but this was rejected. MEPs did however agree that targets for renewable energy use in 2030 should be binding.

Speaking after the vote, Jill said: "There is growing recognition that developing renewable energy can create jobs and strengthen the economy. I regret the failure of the European Parliament to set more ambitious, binding targets. Sourcing 40-45% of our energy from renewable sources by 2030 is perfectly feasible, and we should be aiming higher. I hope that the Commission proposals on climate and energy will reflect this kind of ambition."

Flemish nationalist MEP Mark Demesmaeker has welcomed an EU level agreement that will allow cross border pandemics to be dealt with more swiftly and efficiently in future.

Demesmaeker took part in negotiations leading to the agreement as co-rapporteur. He commented: "An epidemic doesn't stop at the border of an EU member state. This agreement will be crucial in protecting public health in Europe. It should enable member states to join forces and respond more efficiently to pandemics."

The agreement is intended to help EU states be better prepared to protect citizens from future pandemics and environmental disaster. It sets out procedures to be followed in responding to urgent threats and includes improved access to vaccines and better risk and crisis communication for the public and for healthcare professionals.

Demesmaeker added: "Incidents such as the H5N1 bird flu and the H1N1 Mexican flu outbreaks have left us in no doubt of the seriousness of potential pandemics. In our globalised world we must be prepared for incidents such as pandemics which can spread very quickly. Certainly in the context of the H7N9 bird flu virus that's currently claiming victims in China, we have to be prepared. This includes having a better warning system at EU level which will help us more efficiently prepare and respond more vigorously. A fixed panel of medical experts will from now on continue to follow potential hazards and advise on measures to be taken."

Earlier in May, the European Parliament approved a package of rules covering the safety of offshore oil and gas exploration.

SNP MEP Alyn Smith, welcomed what he described as an acceptable European safety regime which protects Scotland's North Sea workers. Alyn tabled a series of amendments to make the new regime more practicable for Scotland. He described the final text as not just workable but positively advantageous to the oil and gas sector. Most notable was an amendment which changed the proposal from a strict Regulation to a more flexible Directive which will ensure that Scotland's world-class offshore safety standards are not in any way lowered.

Speaking after the vote at the May Strasbourg plenary, Alyn said: "What started off as an unacceptable proposal for Scotland has been transformed with the help of the industry, unions and other stakeholders. They were on the ball with this and worked closely with MEPs to make sure that the incoming EU legislation wouldn't diminish the oil and gas safety regime in the North Sea.

"Quite the reverse, these EU rules have Scottish fingerprints all over them and will form the basis of EU rules which will become the gold standard for operations worldwide. As we see increasing operations in other countries it is all the more important that our workers in far off places have a comprehensive set of clear and well tested rules to work with."

N-VA MEP Mark Demesmaeker has raised concerns about the conditions and treatment of Syrian refugees who have fled the violence in their country and taken refuge in neighbouring lands.

Mark is a member of the European Parliament's Foreign Affairs and Human Rights Committee. He raised particular concerns about women and girls in refugee camps being subjected to sexual violence.

The European Parliament considered a resolution on the conflict during its May plenary session. Mark spoke in the debate and raised particular concerns about the abuse and sexual exploitation of girls and women, including at the Za'atari refugee camp in Jordan.

Mark commented: "I have been in touch with the UNHCR representative in the camp who confirmed that girls and women are victims of abuse. They often arrive alone and find themselves forced into prostitution, sometimes by their own families. There are reports of forced marriages, and women being forced to work in brothels in the larger Jordanian cities."

The UNHCR has responded with an action plan to deal with the situation and has asked for more funding. Demesmaeker added: "Funding must be targeted at helping female refugees and the EU, as one of the biggest donors, must insist upon this. We also need to apply more pressure on the Jordanian government to act."

Some 20,000 people visited the European Parliament buildings in Brussels on Saturday 5 May for the annual Open Day.

A popular, annual event, the day is designed to give people an insight into the work of the European institutions.

All political groups in the Parliament were represented, including EFA, with its own stand adjacent to our Green colleagues.

Visitors were fascinated by our montage of flags from Europe's stateless nations. There was also an opportunity to view the film of our MEPs visit to Palestine, and our clip about the work of the EFA Group.

EU farming subsidies are being used to support bullfighting in Spain according to a report published by Catalan nationalist MP Alfred Bosch.

He made the claims at a Brussels press conference hosted by EFA MEP Ana Miranda from Galicia.

According to Bosch, a Catalan nationalist member of the Spanish parliament, around 130 million euros in EU CAP funding is used annually to subsidise the Spanish bullfighting industry.

With the support of other MEPs, both Ana Miranda and Alfred Bosch have written to Europe's Agriculture Commissioner calling for the subsidies to be stopped and redirected towards creating sustainable jobs in the real agricultural industry. They also called for EU member states who misuse CAP funding for purposes such a bullfighting to face sanctions.

EFA MEP François Alfonsi from Corsica welcomed the historic vote of the Corsican Assembly to grant co-official status to the Corsican language.

The vote comes twenty five years after the same body affirmed the existence of the Corsican people in another historic vote.

Alfonsi hailed both votes as the key constitutional steps on the long journey to achieve recognition for the Corsican people and the re-establishment of their rights.

Corsican is spoken by an estimated 400,000 people and estimates suggest that about half the population of Corsica have some proficiency in the language. It is the first language of around 10 percent of the population.

Tatjana Ždanoka said: "This deal confirms the scale-back of the EU's border-free system, at the whim of EU governments. EU member states will retain final say as regards the reintroduction of border controls. This outcome is clearly at odds with the integrity of Schengen and flies in the face of the trans-national nature of the border-free system. It is a regrettable lack of ambition for this flagship EU policy."

Plaid MEP Jill Evans welcomed the European Commission’s decision to restrict the use of pesticides linked to bee deaths earlier this month. Bees are vitally important to our ecosystem and contribute over 22bn euros (£18.5bn; $29bn) annually to European agriculture. Jill supported the ban, which was not backed by the UK government.

Jill said: "The recent decline in the number of bees is putting the livelihoods of over 4,000 beekeepers in Wales in danger. The value of the 'bee economy' to the UK is estimated at £400 million annually. It is not just a question of money; bees play a central role in the pollination process and, therefore, play a crucial role in our food chain and our natural ecosystems. Bees are pollinators that provide us with a free service that allows us to reap millions of pounds in benefits.

"So it was good to see the European Commission take steps to safeguard the future of bees. There was a partial ban on three types of neonicotinoids: thiamethoxan, imidacloprid and clothianidin, but I support a total ban on all neonicotinoids."