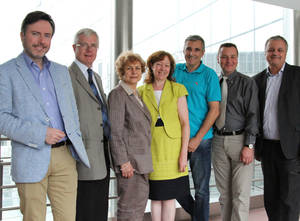 EFA MEP François Alfonsi's report on Endangered Languages was adopted by an overwhelming majority at the European Parliament's September plenary session in Strasbourg. The report calls for urgent action to protect the Europe's endangered languages.

The report calls for more to be done to help 'intergenerational transmission' so that languages are passed on from one generation to another. It also calls for clarity on the EU funding that may be available to support endangered languages over the coming years. The European Union currently has 23 official languages, but there are over a hundred endangered languages spoken across the continent.

Speaking after the vote, François said: "Language diversity is part of Europe's rich cultural heritage. Respect for linguistic diversity is enshrined in the Lisbon Treaty. Today's vote is an acknowledgement that much more needs to be done to protect endangered languages.

"This means learning from countries that have succeeded in saving their languages. It also means making funding available at EU level where necessary. As I've said before, this will require a joint effort between the European Commission and Europe's nations and regions to preserve and promote our rich linguistic heritage."

EFA Group President Jill Evans (Wales), congratulated her colleague: "This report is a significant step forward in protecting and promoting language diversity in Europe. Experience has shown that multilingualism is not only culturally important, but is also of social and economic importance. Europe's rich linguistic tapestry reaches far beyond the 23 official languages of the European Union and this diversity is something to celebrate."

The report was adopted with 645 votes in favour, 26 against, and 29 abstentions.

EFA MEP Mark Demesmaeker organised a working visit for colleagues to his home town of Halle, and the surrounding area known as the 'Vlaamse Rand' or Flemish Rim. This is the Dutch-speaking periphery of Brussels and faces its own unique challenges as a ring of Dutch speaking communities surrounding predominantly French-speaking Brussels.

"The Flemish rim and its inhabitants face significant challenges in preserving its uniquely Flemish character. I've noticed how expat visitors often mistakenly believe that they're in a bilingual area, or even a French speaking extension of Brussels!" 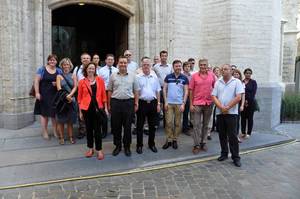 Picture: EFA MEPs and colleagues visit the city of Halle

The group visited Gaasbeek Castle, Coloma Rose Garden, and the city of Halle.

Mark said: "The European and other international institutions are a boon for Flanders, and our capital city. For our EFA Group, respect for the local languages and cultures is a principle that we defend for regions across Europe. In this context, the 'de-Dutchification' around Brussels is a disturbing phenomenon that I will continue to highlight."

Some EFA MEPs expressed grave concerns following the detention of members of Basque prisoners' rights group Herrira. The group works to improve the conditions of Basque political prisoners held in Spanish jails. Their offices in Bilbao and other towns were raided by Spanish police and 18 members detained.

Several EFA MEPs are members of the European Parliament's Basque Friendship Group. This group works to promote EU support for a negotiated and democratic peace process in the Basque Country.

Commenting, Basque MEP Inaki Irazabalbeitia (Aralar) said: "We condemn this provocative act by the Spanish authorities against a group that is playing an important role in the Basque peace process. The Spanish state needs to be reminded of its obligations as an EU member to respect democracy and the rule of law."

François Alfonsi MEP (Corsica), a member of the EP's Basque Friendship Group said: "Using military police to raid the offices of a peaceful prisoners' rights organisation is totally unacceptable conduct for an EU government. This is an act of intimidation and provocation that undermines efforts to build a peaceful, durable peace in the Basque Country."

EFA MEP Inaki Irazabalbeitia is organising a conference at the European parliament in Brussels with AMARC Europe, on the issue of radio broadcasting in minority languages.

The event takes place on Wednesday 16 October from 10am in Room A3E2 of the European parliament.

Experts in the field will look at how to promote minority language community radio, and exchange best practices.

More information and registration at http://efa.greens-efa.eu/radio-broadcasting-in-minority-languages-10572.html

Access to Dutch speaking medical staff in Brussels and the surrounding area could be made more difficult. That may be the unforeseen consequence of new EU rules on free movement of workers in the health sector, fears N-VA MEP Mark Demesmaeker.

The rules, which come into force next year, will allow healthcare workers from one EU state to work in another, provided they have equivalent qualifications and can speak at least one of that country's official languages.

Whilst supporting the principle of free movement, Demesmaeker is concerned that the new rules will make it harder for Dutch speaking Belgians in and around Brussels to get health care in their own language.

Demesmaeker is trying to get the rules amended. He said: "When the rules change next year, then a health worker from another EU state will only be obliged to speak one of Belgium's official languages to be able to work here. There would be no obligation to speak Dutch in order to work in a Brussels hospital, treating patients who may be Dutch speakers. That just doesn't make sense and must be changed."

Biofuels not the answer

Plaid Cymru MEP Jill Evans has questioned the wisdom of EU support for biofuels. She said that rather than helping fight climate change, the development of food-based biofuels has a damaging effect on the world's poorest communities.

They have been promoted as a green method of producing energy, but many recent studies show that crops for biofuels actually need a large amount of land and produce major CO2 emissions. A majority of MEPs voted for a 6% cap on the use of food-based biofuels, but Jill wanted a stricter limit.

Jill said: "What are called first-generation biofuels can have a damaging effect on the environment. Taking over large areas of croplands which should be used for food production in poor communities to produce biofuels for use in our cars is totally unacceptable. We have to explore all means of producing alternative fuel but we should reject those that are not sustainable and actually create more problems for poor communities that depend on local farming."

SNP MEP Alyn Smith gave a "qualified welcome" to the agreement between Parliament, Council and Commission on the outstanding issues (related to the Multiannual Financial Framework) on CAP reform.

This follows the agreement last June on other CAP policy issues which will guarantee new entrants access to entitlements, end the phenomenon of "slipper farming", increase coupled support for Scotland’s hill farming, and ensure that Scotland’s non-grass based pasture lands will be included as eligible.

The agreement will pave the way for the roll-out of the implementing regulations followed by the official start to the new CAP on 1 January 2015. But the agreement was mired in controversy due to Council’s refusal to negotiate on key finance-related issues agreed by Heads of Government in February: a clear violation of the rights of Parliament and democracy in Europe, as protected by the Lisbon Treaty

A member of the European Parliament's Agriculture Committee, Alyn said: "I’m pleased that Scottish farmers now have the certainty on the basic CAP regulations which they need in order to take the necessary business decisions ahead of the roll-out of the new CAP in 2015.

"I’m proud of what we’ve achieved for them over the past two years of negotiations. However, no one can pretend to be pleased over the way these final "negotiations" have gone. Council has simply refused to engage with us on the MFF related issues, banking on running out the clock rather than treating the Parliament as an equal partner.

"I’m also disappointed the agreement didn’t go further on capping: we have simply not addressed popular concerns on this issue, and when everyone is having to tighten their belts it’s only right that the nation’s wealthiest farmers should as well."

No EU tax on energy

Although supportive in principle of an EU internal market in energy, SNP President Ian Hudghton, warned of the dangers of the EU gaining powers of taxation over energy.

MEPs had been considering the issue at the Strasbourg plenary session in September. The EU's Member States are supposed to complete the internal energy market by 2014.

Ian commented: "I voted against the calls for an EU energy level. The internal market in energy is important for all our nations and the EU must do its best to make it work. The EU’s efforts should not however extend to their gaining powers over taxation on energy; that must remain a Member State competence."

MEP Tatjana Ždanoka took issue with some of the proposed changes to the EU's visa requirements for visitors for third countries.

MEPs in Strasbourg were debating changes to the regulations with the European Commission and Council. At present the EU operates a 'positive list' system where visitors from certain third countries can take part in a visa waiver programme. But there has been some controversy at plans to allow for suspension of the scheme is certain circumstances such as a sharp increase in asylum applications or illegally staying nationals.

Tatjana Ždanoka said: "There has been progress on visa reciprocity but we are completely disappointed with the deal concerning the temporary suspension of visa waiver. In our group we do not agree that the increase in the number of asylum applications could be a criterion for suspension.

"The nationals of a third country on a positive list should not be punished for the attempts of the nationals of the same country to use the individual right to asylum without a good reason."

N-VA MEP Mark Demesmaeker, a member of the EP's Public Health Committee, welcomed new rules to improve the safety and quality of medical devices. The move was prompted by concerns over the safety of French made breast implants, which caused widespread distress for those affected.

The new EU rules allow for stricter controls across the EU, as well as better traceability, and greater co-ordination.

Mark said: "With these tighter rules, we'll be making sure that medical devices do not come on to the market until they've been subject to stricter testing. We've seen with the breast implant scandal how urgently these new rules are needed. National authorities, across the EU, will now have to hold medical devices to even higher safety standards before authorisation is given for their commercial use."