EFA MEPs say No to TTIP

MEPs from the European Free Alliance (EFA) Group in the European Parliament are saying 'no' to TTIP in Strasbourg this week.

TTIP is the Transatlantic Trade and Investment Partnership, a bilateral free trade agreement currently being negotiated in secret between the European Union and the United States. 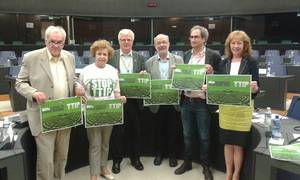 The final agreement will require the consent of the European Parliament, but many MEPs are unhappy with the direction of negotiations and are concerned about the potential to undermine public services.

One of the main concerns relates to ISDS or Investor State Dispute Settlement which could result in international corporations being able to sue democratically elected governments in secret courts of arbitration. 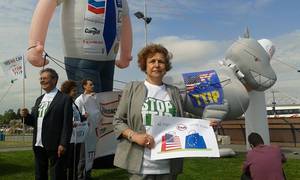 Many organisations are concerned that TTIP will lead to deregulation that will undermine hard won European standards that help protect the environment, food quality and workers' rights.

This week in Strasbourg the European Parliament will be voting on recommendations for the TTIP negotiations, a key step in the ongoing process, and an expression of people's democratic view.

EU must fight illegal trade measures at the WTO

EU must remain united in defence of multilateralism