EFA MEPs have paid tribute to the victory in Corsica on Sunday 13 December of the progressive nationalist coalition Pe A Corsica (For Corsica) which finished first in elections for the Corsican Assembly.

The alliance of autonomist and independentist parties received around 35% of the vote and wins 24 out of 51 seats.

They have pledged to push for law-making powers for the Corsican Assembly and their leader, Gilles Simeoni, said that his victory showed Corsicans had a thirst for 'democracy, economic development and social justice'. 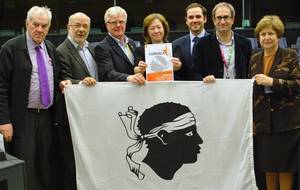 Paying tribute to the historic success in the European Parliament plenary, President of the EFA Group, Josep-Maria Terricabras said:

"As President of the EFA Group and on behalf of my colleagues I want to express our great joy at the election victory of the coalition for peace in Corsica, which brings together nationalist and independentist groups.

"Corsica's recent history has been neither calm nor easy. France has not yet accepted, for example, that Corsican should be the island's official language. Neither does the Corsican assembly enjoy legislative powers.

"These are anomalies, amongst others, which must be democratically brought to an end with the new mandate of Gilles Simeoni.

"I very much hope that the decisive elections which will take place in Corsica two years from now will further attest to the wonderful shift towards sovereignty which gave the island's inhabitants power and hope at these last elections."