Democracy is about choices 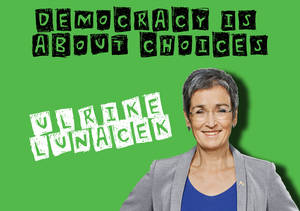 The European Parliament needs to be reformed. As the only directly democratically-elected EU institution, the European Parliament must uphold the standards in public office expected by EU citizens. The most recent review of the parliament's Code of Conduct was an exercise in disappointment. A more comprehensive Code of Conduct for MEPs, that ensures proper financial disclosure and that is properly implemented and monitored, must be a priority for the coming legislative term. The European Parliament should champion ethical policy-making, banning and sanctioning abuse of political power and conflict of interests between corporate interests and politicians.

We need to finally deliver real and meaningful rules on lobbying transparency. Despite years of debate, the EU institutions and the European Parliament still lie far behind more progressive jurisdictions in this regard. The European Parliament voted with an overwhelming majority in favour of a mandatory lobby register and work on this must begin as soon as possible. It is crucial that there are no loopholes and that all those engaged in lobbying the EU political process operate in complete transparency. MEPs should refuse to meet or engage with lobbyists not on the register. We need a clear footprint of all legislation being dealt with by MEPs. This 'legislative footprint' implies public disclosure of all contacts with lobbyists and organisations during the legislative process. There is a need to provide for real protection for whistleblowers. This is crucial for democratic legitimacy in the EU.

Legitimate public concerns have been raised about some of the financial practices within the Parliament. Taxpayers must be reassured that the European Parliament's budget is beyond question. I want to push for adequate and efficient expenditures, based on essential criteria such as utility, environmental impact and the social dimension. All expenditure by the Parliament and its MEPs must be fully transparent. Increased use of free and open software can also save costs and overcome the lock-in of dependence on big corporations.

The European Parliament should lead by example, reducing the environmental impact of its operation and strengthening ethical and sustainable practise and procurement. Maximising energy efficiency and reducing the parliament's carbon footprint must be a priority. The European Parliament’s building stock should set an example in terms of progressive energy management, energy efficiency measures (insulation and smart energy consumption). We need to strengthen the institutional role and impact of the EMAS environmental management and audit scheme. Mobility, sustainable and fair trade food, improving workplace health and safety and a meaningful commitment to sustainable procurement and resource use are also core priorities.

ONE HOME FOR THE EUROPEAN PARLIAMENT

There is an overwhelming majority of MEPs and EU citizens in favour of finally realising a single seat for the European Parliament. The European Parliament needs a president that finally takes this seriously and proactively engages with EU governments to make this a reality. The arguments in favour of a single seat, whether financial, social, environmental, political or related to operating efficiency, have all been clearly made. It is now time to make the travelling circus history and ensure this unnecessary negative distraction for the European Parliament can be parked once and for all. If the European Parliament wants to continue to exert influence on the EU political process, its seat has to be located clearly and unequivocally in Brussels. However, we must also ensure there are sustainable solutions for the existing places of operation of the EP and we have already put some proposals on the table in this regard.

The European elections have delivered a clear rebuke to the status quo. There is a need for the European Parliament to respond to this and to take the concerns raised by EU citizens seriously. This must be a core priority for the coming legislative term. However, we cannot fall into the trap of pandering to populism, nationalism and extremism. The European Parliament has long been a champion of fundamental, human and citizens’ rights and this must continue. It must face down the knee-jerk trend to intolerance, disrespect and second class treatment of women and minorities, whether racial, sexual, social or otherwise. The European Parliament must and can do more to promote and defend the core values on which the EU is founded.

Democracy is about choices