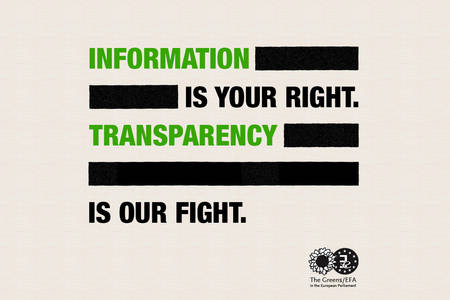 The EU's Food Safety Authority, in charge of reviewing whether or not to approve glyphosate – a herbicide used for example in Monsanto's Roundup products – has responded to a freedom of information request made by 4 Greens/EFA MEPs by proposing that access to the controversial studies may be provided via a secure “reading room”, a set-up now being used for Members' access to TTIP and Tax-justice related documents. What makes this reading room different is that it was proposed in response to a public access to documents request, thereby making in unclear whether access to the reading room would be only for the 4 MEPs in question, or for the whole European public, as the public access to documents rules would dictate.

The Greens/EFA group is worried that this “reading room” arrangement for sensitive documents is creating a dangerous precedent that can be applied even to documents that are crucial for reviewing the independence and adequacy of EFSA's decision-making and product/chemical approval process. MEP Heidi Hautala, who has fought several access to documents cases before the European Court of Justice, highlighted that “this culture of radically limited transparency, whereby MEPs can only access a secret room without their phones, laptops and sometimes even pens or paper, should only be applied in extreme cases, and should not be used in response to public access to documents requests”. The studies on which EFSA based its controversial assessment that glyphosate was “probably not carcinogenic”, which contradicted the WHO's assessment that it was “probably carcinogenic”, have to date been hidden from view. The MEPs requested all 182 studies on which EFSA's assessment was based, and the response received so far (past the deadline) says that 100 of these studies are already public, and 82 are not. MEPs were provided with a list of the studies and the authors, but no copies of any studies themselves. In addition, EFSA has argued that it will take them a very long time to process the request, and even though this is not a final response to our request, they have already stated that they do not see an overriding public interest in obtaining the studies - citing the need to protect the “commercial interests” of the private companies that funded and worked on the studies as an overriding factor. They also claim that they must consult with each and every company. How can you help?

We need to see the evidence on glyphosate