Ulrike Lunacek meets with the new Brazilian Ambassador to the EU 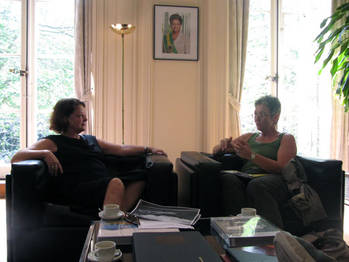 Ulrike Lunacek met with Vera Machado, the new Brazilian Ambassador to the EU, this afternoon after the end of our delegation visit to the controversial Belo monte mega dam site.

Ulrike handed her a first debriefing paper (agreed with our other two delegation members Eva Joly and Catherine Grèze who could not be in Brussels today) with our main findings and recommendations.

The Ambassador acknowledged our efforts but made it clear that from the Brazilian government's side the decision to build the dam had been taken. Nevertheless she acknowledged that there are (procedural) problems at the legal/rule of law level as well as with implementation of conditions and with communication. The Ambassador expressed surprise about a 'spy' following us and taking pictures of us and assured us of follow-up on this issue. She also mentioned concern about the recent vote in the EP on the reduction of the percentage of bioethanol added to fuels.

During our talk with Ambassador Machado, Ulrike also raised the very difficult and often violent situation created by the fact that tens of thousands of male workers are operating at the site, in and around Altamira, which has created grave concern about an unprecedented rise in prostitution, sexual abuse and even rape, against women and girls in the region. Ulrike told the ambassador that we would strongly appreciate measures taken on this issue by all Brazilian government levels (federal, regional, municipal) and Norte Energia.

We agreed on keeping in touch and a future follow-up meeting with all three MEPs in September.

The Amazon up for grabs?