Focus on minorities and languages in European Parliament

The European Parliament's Intergroup for Traditional Minorities, National Communities and Languages has held its inaugural meeting of the new parliamentary term in Strasbourg.

The group is a cross party gathering of MEPs concerned with minority and language issues.

Catalan-speaking EFA MEP Jordi Sebastià from Valencia has been elected as one of three co-Chairs of the group along with Hungarian-speaking MEP Kingal Gál and Nils Torvalds, a Swedish-speaking Finn. 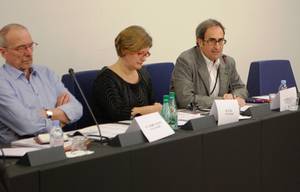 The group has played a significant role in past parliaments in raising the profile of minority issues, and promoting linguistic diversity and languages rights.

One former chair of the intergroup is former EFA MEP François Alfonsi from Corsica, who is well known for his influential report to the European Parliament calling for action to help Europe's endangered languages.

In its manifesto published in April 2014, the grouping said:

The Intergroup for Traditional Minorities, National Communities and Languages will meet monthly in Strasbourg and plans to invite people and groups affected by the issues concerned to give evidence to MEPs.

Why the EU urgently needs to act on gender-based viole…