The European Parliament will tomorrow vote a non-binding resolution opposing the renewal of the license for the controversial weedkiller glyphosate. Earlier this month, the Parliament's environment committee supported this resolution by a large majority. Greens maintain their position in favour of this resolution, which calls for an end to glyphosate use in Europe.

In November 2015, the EU's food safety agency (EFSA) judged that glyphosate, the active substance of Round Up, the most sold herbicide in the world, was "probably not carcinogenic for humans". This position was contrary to the conclusions of the World Health Organisation's research institute IARC, which concluded in March 2015 that glyphosate was "probably carcinogenic for humans". The IARC evaluation was carried out as transparently as possible, publishing for example the researchers' declarations of interest. This was not at all the case with EFSA. As NGO Corporate Europe Observatory (CEO) revealed, 80% of EFSA researchers failed to publish their declaration of interest and EFSA based part of its conclusions on unpublished studies. The European Commission nevertheless intends to re-approve glyphosate for the next 15 years. However, thanks to pressure from civil society and our Green campaign, the final vote at member states' level has been postponed until Mid-May.

So in addition to the vote in the European Parliament this week, MEPs are keeping the political pressure on the Commission but also on member states, who are supposed to take a final decision on the renewal of glyphosate at an upcoming standing committee (on Pharmaceutical) on 18-19 May. On the initiative of the Greens, a cross-party group of MEPs is taking part in a test that assesses the level of glyphosate in their urine. MEPs have also sent a joint letter to Commissioners, Juncker, Timmermans, Andriukaitis and Hogan to challenge them to take the same test. Will the EU Commissioners dare?

All MEPs are invited to take part in this symbolic political action that is aimed at raising awareness of the omnipresence of a suspected carcinogenic substance like glyphosate in our daily life. This action aims to make clear that glyphosate is literally everywhere in our environment, our food and even in our bodies, and... urine.

The idea for this project comes from the recent publication of a glyphosate study based on urine testing in Germany, published by the Heinrich Böll Foundation. Glyphosate residue was recorded in 99.6% of the 2,009 people monitored by the study in Germany. The most significant values were found in children aged from zero to nine and adolescents aged 10 to 19, particularly those raised on farms. Meat eaters also displayed higher levels of glyphosate contamination than vegetarians or vegans. The Leipzig based team at the origin of the German study will also carry out the project for MEPs. The test results will be delivered before mid-May.

MEPs will receive their individual results. The use of personal data is subject to data protection law. Individual test results will be strictly confidential and communicated only to the MEP concerned. These data will be compiled into a statistical analysis to provide a scientific basis for the debate on glyphosate.

A recent poll commissioned by WeMove.EU and Campact e.V. found that an overwhelming majority (64 per cent) of people in the five biggest European countries are in favour of a ban on the controversial herbicide. Only nine per cent would favour its reauthorisation. The poll found that in Italy, three-quarters (76 per cent) of those surveyed favoured a ban, with Germany and France showing similarly high percentages (70 and 60 per cent respectively). In the United Kingdom and Spain, clear majorities of 56 per cent supported a ban. Across all countries, fewer than 13 per cent endorsed the re-approval of the herbicide.

There are alternatives to glyphosate!

Organic farmers have demonstrated the same thing time and time again - glyphosate is not necessary for productive farming. The farming of the future must be based on high biodiversity and a high variety of crops and structures, crucially avoiding the vast monocultures that attract pests in the first place, or the continuous cultivation of fields that allows the pests to build up in soil and vegetation.

Research shows that “when farmers adopt systematic approaches based on agroecology, there are large, and multiple, environmental benefits. These include reduced vulnerability to pests, diseases, and weeds, and hence reduced justification for the use of herbicides like glyphosate, or other pesticides. Research also shows that these systems are more resilient to drought, providing higher productivity, and are practical and profitable as well. And both research and working farms are showing that these methods can work commercially.”

A detailed economic impact assessment by a German federal authority has assessed the feasibility of a partial or complete abandonment of glyphosate applications for farmers in Germany (full study). The economic impact assessment revealed that “under certain conditions glyphosate does not need to be used” and that “consequently, it can be stated that glyphosate should not be regarded as a standard measure in arable crop production systems”.

The use of glyphosate is linked to a highly intensive agriculture that is simply not sustainable. There are safer, non-chemical alternatives to glyphosate, starting with crop rotation and shallow ploughing and mulching, which are equally effective ways of tackling weeds (see statement by German Environment Agency).

Call on your MEP to participate in the urine test using the sharepic here and hashtag #MEPee on social media: 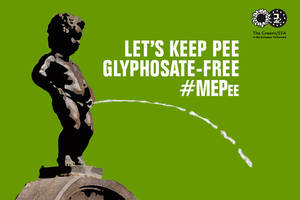 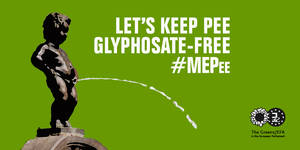 Sign the petition to call on MEPs to vote for the resolution against glyphosate use in Europe.