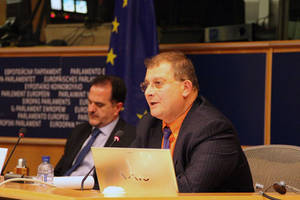 Professor Gilles-Eric Séralini was invited on Monday 27th May to the session of the PETI Committee that discussed 3 petitions related to GMOs, in particular to debate the persisting conflicts of interest and industry influence that affect European policy making and decision taking. At the heart of the matter is the way EFSA conducts risk assessments of GMOs. Even though there have been some improvements within EFSA recently, under the impulse of EFSA's Executive Director, Catherine Geslain-Lanéelle, and thanks to constant pressure by the Greens/EFA group, civil society and citizens, these improvements fall short of the "revolution" that is needed in the risk assessment of GMOs, both in terms of the methodology, the origin and transparency of the data that are used as well as the range of scientists that are represented in EFSA's scientific panels. Also, the new implementing regulation for the risk assessment of GMOs for food and feed that the Commission adopted last February contains serious flaws. Séralini testified in the European Parliament on the follow-up of his 2-years toxicological study on rats published last September in the peer reviewed scientific journal Food and Chemical Toxicology, which provoked a furore among GMO proponents and the biotech industry. Séralini explained a few of his main concerns on the assessment of GMOs and their associated pesticides, among them the most sold herbicide in the world, Round-up, from Monsanto (also the seed producer of Round-up Ready crops, such as soya, corn and cotton). Indeed, Séralini has shown and insisted on the fact that glyphosate is not the only active ingredient of Round-up, but that there are other toxic components in the widely used herbicide. This is crucial because only glyphosate has been tested for its toxicity (and only in the short term on ten rats). He's accusing EFSA of a blatant lack of transparency as the authority has not been able to make the raw data that it has been used to give its opinion to the EU institutions public, after which the EU authorised the use of the herbicide. A second major flaw that Séralini addressed, comes from what is called the "historical data" of control rats used by the agrochemical industry, which are generally accepted by EFSA. Séralini claims that these data, which are used to detect health impacts, are flawed. This for the simple reason that most of the control groups of rats that have been used the past decades for other scientific experiments were fed with feed that was from GMO origin and/or treated with pesticides (they haven't been fed with organic feed!). Séralini stated that these rats should not be considered as "control groups".

Lastly, he countered criticism on his study for having used too small a number of rats in his 2-year experiment. Séralini reminded the EP of the fact that EFSA's scientific panel on GMOs gave a positive opinion on the Amflora GMO potato with only 5 rats per sex being fed with it in a short term experiment. Séralini also testified on some behind-the-curtains attempts to have his study discredited. According to Séralini, within a few days to weeks after the publication of his paper, many 'scientific' advocates often linked to the biotech sector tried everything they could to avoid that it could be taken seriously by other experts, scientific publications and the general media. For example, an ex-Monsanto researcher,, Mr Richard Goodman, has just been recruited to the editorial board of the scientific journal that had published the article (Food and Chemical Toxicology), and did exchange communications on how to have the article retracted with Mr. Paul Christou, who happens to be the owner of the patent of the method used to make Round-up Ready soybean! Séralini said that he had been surprised that some commentators linked to the agrochemical industry have been able to comment on the article within one day, although it took the peer reviewers months to assess it.      Green MEP Catherine Grèze applauded the perseverance of the petitioner Brian John and mentioned that the huge world-wide protests against Monsanto, that took place last Saturday, was further proof of the fact that citizens all over the world have serious reservations about the safety of Monsanto products and pesticides as well as GMOs.

Grèze said that doubts about the risks of GMOs will remain as long as the issue of conflicts of interest within EFSA remain unsolved. One can be very concerned when one sees the increasing dominance of the biotech industry on research, scientific careers, expert bodies and even international negotiations, as we see happening in the early discussions around an EU-US free trade agreement (TTIP). These negotiations carry the risk of weakening EU regulations on GMOs and other issues as they are considered by US companies as trade barriers. EFSA needs to get rid of the remaining conflicts of interest in the authority, to enhance its independence and scope of expertise on GMOs, including changing the risk assessment methodology, of which the design has been heavily influenced by the industry. Grèze also asked why EFSA is still rejecting a long term toxicological study, as the Séralini's article would at least warrant this. It is in fact the only one that has been done on such duration. Séralini already gave his raw data to a ''huissier' who can make it public "for zero euro" as soon as EFSA does the same. Until there is greater assurance in the quality of the EFSA expertise on GMOs, the widening of the scope of the scientists participating, as well as the range of scientific issues that are assessed, the Greens/EFA group asks for a moratorium on all GMOs. Another Greens/EFA MEP, Margrete Auken, who's a member of the Committee on Petitions, insisted that EFSA makes all raw data public, in order to allow for a real independent and pluralist expertise. EFSA and the Commission's answers in the PETI Committee were not very convincing. They explained, for example, that they cannot disclose the data related to Monsanto's Round-up because it was Germany that was in charge of assessing the herbicide. The seeming impossibility to access the raw data used for authorising the herbicide is not very reassuring for EU citizens in any case. The EC-spokesman acknowledged the importance of transparent data and did announce that, due to the debate after Séralini's study, the EC will launch a two year carcinogenic study in autumn 2013, open to all scientific groups. The design, methodology and involved scientists will be key for such a study be satisfactorily implemented.  However, in general the weakness of the answers by EFSA and the EC did not convince the PETI Committee, for which transparency and citizen participation are of the utmost importance, especially in such a difficult and controversial issue. It calls on EFSA to publish all data that have not yet been published and proposes to hear other competent agencies and parliamentary Committees, in particular the ENVI and AGRI Committees. It decided to keep the petition open, which will keep the political debate open and pressure both EFSA and the Commission to really put all data on the table. The Greens/EFA group considered it as a positive outcome that the petition stays "open" and will continue pressing for full transparency and a sound and independent methodology for the now newly announced 2-year toxicological study, to be performed in order to confirm or discard the results from Séralini's study.