Today, the European Parliament voted on the EU budget for 2017, sending a clear signal to the European Commission that they need to urgently reform their ethics codes, particularly to control the revolving doors (which is when public officials move into the private sector to work in the same industries that they were previous in charge of regulating).

The various scandals involving both past and present Commissioners led the European Parliament to introduce a budget reserve into the European Commission's budget as a "slap on the wrist" given their refusals so far to reform their ethical code of conduct.

Greens/EFA members of the budget committee managed to "freeze" 20% of the budget line that is used to pay ex-Commissioners their "transitional allowance" up to three years after they leave their position. This is paid in order to help them to “transition” into another job; and arguably is there to prevent them from relying on the revolving door. The total budget for this is just over 2.5 million.

In practical terms, this means that the Commission can spend up to 80% of the budget line, BUT, if it wants to use the remaining 20% (or €505,000), it will have to comply with the demands set by the European Parliament. And the demand is clear: "The Commission should adopt a stricter code of conduct before the reserve is released". The full text of the amendment is below, as is the text of the resolution which focuses on conflicts of interest and revolving doors.

Negotiations with the other 2 institutions are due to begin soon, and we want to keep up the pressure to make sure that this item is not dropped somehow along the way.

The text of the resolution:

Decides, in the light of recent revelations and in order to regain the confidence of Union citizens and the credibility of the Union institutions, to hold 20% of appropriations of the Temporary Allowances for former Members in reserve until the Commission enforces a stricter Code of conduct for Commissioners to prevent conflict of interests and the revolving doors.

The amendment tabled thanks to the Greens/EFA group 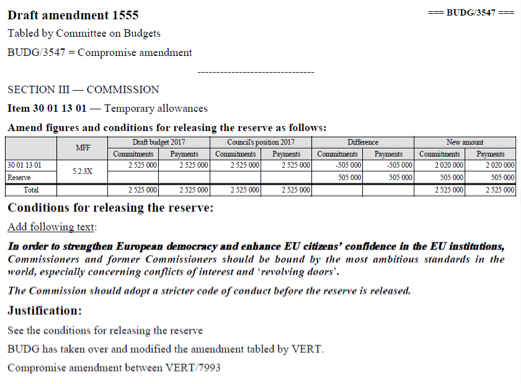