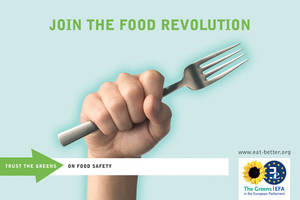 The EP voted to reject draft EU legislation on production and marketing of seeds. For the Greens/EFA this is a clear signal that the proposal's content needs to be improved by the Commission. Seed diversity means food security! The new proposal therefore needs to recognise the need to protect farmers' rights as well as biodiversity and an equitable organisation of the seed market.

Green candidates for the European elections and then from May onwards, newly-elected MEPs, will keep fighting to make key green principles on food security, farmers' rights and respect of biodiversity central to the new proposal.

In February and March the European Parliament voted in favour of two own-initiative reports (on plant breeding and the horticulture sector) clearly outlining the position of the agro-chemical industry in favour of GMO and pesticide use. These texts summarise the old agro-chemical industry myths, which serve only the corporate agenda and are so detrimental to society and democracy as a whole.

Greens/EFA MEPs rejected both reports and introduced roll-call votes on all the bad elements of these texts, recording how MEPs voted, which will allow them to be scrutinised for inconsistency and hypocrisy.

Detailed articles on these reports:

Food safety and consumer information: All nanomaterials must be labelled in food products.

The European Commission had proposed a regulation on the inclusion of engineered nanomaterials in the EU regulation on food information to consumers but included an exemption for food additives. Last 12th March, the European Parliament voted to reject new draft rules on the labelling of nanomaterials in food products. The Greens/EFA Group had proposed the rejection as this new proposal would have excluded all existing food additives from the labelling requirements, and actually harmed consumer information.

Food aid: New fund for the most deprived makes best use out of EU resources to reduce food waste.

Across the EU, over 90 million tonnes of food are wasted each year. There is no Member State where no food is wasted. Much of this happens early in the production or manufacturing stage or by households, and as such is not easy to access for food banks. However, 5% to 7% is wasted by supermarkets. That alone amounts to at least 4.5 million tonnes of food across the EU, a lot of which might be used by foodbanks instead of thrown away.

On 25th February, the European Parliament voted successfully to adopt and confirm an EU funding scheme, which will provide aid to the most deprived persons for the period 2014-2020. The resources available for the period is EUR 3 500 000 000. The Fund will support national schemes whereby food and/or basic material assistance are distributed to the most deprived persons through partner organisations selected by Member States. With the view to augmenting and diversifying the supply of food for the most deprived persons, as well as reducing and preventing food wastage, the Fund will support activities related to the collection, transport, storage and distribution of food donations. The selection criteria for the food products, and where appropriate for goods, shall also take into consideration climatic and environmental aspects, in particular with a view to reduction of food waste. Where appropriate, the choice of the type of food products to be distributed shall be done having considered their contribution to the balanced diet of the most deprived persons.

Final report of the United Nations Special Rapporteur on the right to food, Olivier de Schutter.

Extract from Olivier de Schutter's website: 'The United Nations Special Rapporteur on the right to food, Olivier De Schutter, today called for the world’s food systems to be radically and democratically redesigned to ensure the human right to adequate food and freedom from hunger. “The eradication of hunger and malnutrition is an achievable goal. However, it will not be enough to refine the logic of our food systems – it must instead be reversed,” Mr. De Schutter stressed during the presentation of his final report to the UN Human Rights Council after a six-year term as Special Rapporteur. The expert warned that the current food systems are efficient only from the point of view of maximizing agribusiness profits. “At the local, national and international levels, the policy environment must urgently accommodate alternative, democratically-mandated visions,” he said. Objectives such as supplying diverse, culturally-acceptable foods to communities, supporting smallholders, sustaining soil and water resources, and raising food security within particularly vulnerable areas, must not be crowded out by the one-dimensional quest to produce more food.”

Taste the Change: the Green Cook Book is out!

This newly released Cook Book gets together local or personal recipes of our Greens/EFA MEPs, reflecting Green values for sustainable, fair, healthy and tasty food! Be the change you want to see on your plate: Cook these easy recipes made of locally-grown, organic and quality food and enjoy them with friends and family! The Green Cook Book is available in 6 languages: English, French, German, Dutch, Swedish and Finnish

As a musician, Brina decided to join the movement for free, diverse healthy and tasty, seasonal and local, fair and sustainable, animal friendly, not wasteful and decent food. She is the author of the official campaign song 'Seeds of Freedom' in support of the Seed and Food Freedom campaign of Dr. Vandana Shiva. As she rightfully says ' Through music, I will "edutain" the world about the truth and the urgent necessity to be aware of our food. Food is the future and we need to ensure that humanity respects the earth and be generous'.