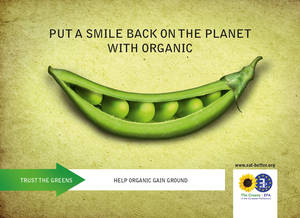 On 13th January, the European Parliament voted to endorse an agreement on a new scheme for the authorisation of genetically-modified organisms in the EU. The Greens/EFA voted against the new scheme, as it would renationalise decisions about GMO cultivation instead of reforming the risk assessment process for GMOs, which is urgently needed

Video: Yes to biodiversity, No to GMOs!

The European Parliament's Food Steering Group insists on the importance of the publication of the Communication on Sustainable Food.

An overwhelming body of scientific evidence points to the damage done to, not only to our environment, but also the health of EU citizens, by present intensive farming systems and pesticide use. This makes it necessary to provide the public with accurate and accessible information on what constitutes a healthy sustainable diet that relies on production methods which are respectful of biodiversity, a reduction in consumption of animal-based foods, lower intakes of fat and sugar, as well as high animal welfare standards.

Last week, a group of elected representatives, members and supporters of the Food Steering Group of the EP highlighted how it is crucial that the newly appointed European Commission outlines coherent policy measures to tackle the issue of sustainable food.

This Group of MEPs from different political groups, including Greens/EFA members sent a  letter (1) echoing the one already sent to the Barroso Commission last year but not followed by concrete achievements - to the Juncker Commission to express their strong wish to have the Communication entitled 'Building a Sustainable Food Systems', published.

Given the many challenges to overcome over the next five years, the publication of this specific Communication will be considered by MEPs and European citizens alike as a positive step in the right direction towards a more coherent EU food policy.

Food is one of our most basic and important needs and an imperative determinant of human health. It is paramount that there is a sustainable food strategy in place to safeguard access to food, and to protect the environment and health of EU citizens.

TTIP and pesticide use: a risk for future food supplies

Negotiations for new US-EU trade deal (Trans-Atlantic Trade and Investment Partnership aka TTIP) endanger our environment, our health, and our democratic process. New report reveals lobbyists’ push for lax regulations on hazardous pesticides.  If passed, food producers in the EU and US could legally use carcinogens, endocrine-disrupting chemicals, and other hazardous substances, increasing the risk of irreversible harm to pollinating bees and future food supplies.

50000 people hit the street to say: 'We are fed up' with factory food and farming

The demo got together small-farmers delegations and NGOs from around the world. The German Greens also joined the march to show support to civil society organisations.

This demonstration - together with conferences and happenings that took place throughout the week end - aimed to bring an alternative to the International Green Week (Grüne Woche) event which takes place at the same period and which years after years shows itself as being more and more pro agro-industry.

This event clearly illustrates how the grassroots movement is powerful and mobilised to raise awareness and influence policies towards a better food system.

Our food system is broken. With the present threats on the political agenda (TTIP, GMO opt out, antibiotic resistance, pesticide use...) The Greens/EFA will more than ever, keep showing support to this growing good food and farming movement.

Below are some more information, pictures and video linked to this event:

Active citizen, life coach and author of the book 'Cultivez votre bonheur' (Cultivate your happiness), Sophie Machot sees eating and supporting the healthy, tasty and local food movement as part of the thousands daily actions that open us up to happiness, solidarity and care about our planet. Together with Sophie we believe that sharing this philosophy can make the Food Revolution happen!

Get to know more about Sophie and Join the Food Revolution yourself!

28/01: Barilla Center for Food and Nutrition Foundation (BCFN) breakfast roundtable “Sustainable Diets: Good for You, Good for the Environment”, 8.00-9.30am, European Parliament, Brussels,.

29/01: CAP Communication networking event, will bring together different networks of communicators on agriculture and farming from across Europe, Brussels, Belgium.