Lignite mining in Lusatia - an environmental and cultural catastrophe

The ecological and social consequences of large scale lignite mining were the focus of a conference at the European parliament organised by the European Free Alliance, in conjunction with local campaigners from Lusatia in Eastern Germany.

Lignite - also known as 'brown coal' - is a low grade form of coal formed from compressed peat. Considered the most polluting form of coal, it is mined on a vast scale in Eastern Germany by Swedish state-owned energy firm Vattenfall. Indeed, CO2 emissions from Vattenfall's German operations exceed those of the whole of Sweden. 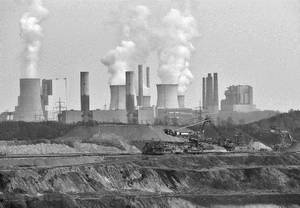 There are proposals to expand operations and force people from their homes to make way for huge open cast mines the size of Manhattan. In August 2014, more than 6000 local residents formed a human chain that crossed the German - Polish border in protest at being threatened with resettlement. See http://www.greenpeace.org.uk/blog/climate/german-poland-border-thousands-are-protesting-huge-coal-mine-20140821

Opening the conference, EFA party president François Alfonsi spoke of the devastating scale of the environmental destruction in the Lusatia region.

"Lusatia is experiencing devastation on a huge scale because of the lignite mining carried out by the Swedish multinational Vattenfall," said Alfonsi. "This goes on above ground with massive excavators that devour all before them: farmland, forests, even homes. Whole villages have been expropriated to make way for lignite mining." 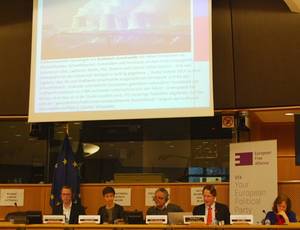 Hannes Wilhelm-Kell, President of local political party Luzyska Aliance (Lusatia Alliance), pointed to the cultural as well as the ecological destruction of lignite mining. "With lignite mining, vast tracts of land are destroyed, including for thermal power plants. It's hugely environmentally damaging - it affects water and air quality as well as devastating huge areas of land. And it's hugely culturally destructive, putting our Sorbian language communities under threat," said Kell.

The Sorbian languages are spoken by about 50,000 people in Lusatia. Both Upper and Lower Sorbian are similar Slavic languages, and closely related to Polish and Czech, and enjoy an official status equal to German in Lusatia.

German Green MEP Ska Keller hails from the region affected by lignite mining. She told the conference: "It's difficult to appreciate the huge scale of this kind of mining without seeing it first-hand. It takes out vast areas of land that was previously used for farming and which supported communities. Over a hundred villages have already been destroyed to make way for lignite mining including one with a church dating back to the 13th century. It has been an ecological and cultural catastrophe."

The imperative for Thomas Burchardt of local civic campaign group Klinger Runde is to develop a plan for phasing out lignite mining in Lusatia. Burchardt said: "There could be 12bn tonnes of lignite left to mine which will run up to 2030. Lusatia cannot stand any more ecological or cultural destruction and we need to plan now for phasing out brown coal." 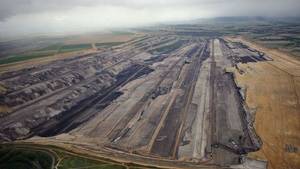 Plaid Cymru MEP Jill Evans spoke of the Welsh experience of coal mining and more recently of open cast mining. She regretted that Wales didn't have more powers to stop environmentally destructive energy projects but highlighted that her own party when in government had introduced a 500m buffer zone and compulsory health impact assessments for open cast mines.

Jill Evans said: "I am shocked with the forced resettlement of communities to make way for mines in Lusatia. Sadly, there are and have been similar stories elsewhere of minority communities being resettled to make way for energy projects and we have seen this in Wales. The profits of energy companies should be used to help local communities affected by exploitation, but what we need is investment in renewables that will really make a difference."