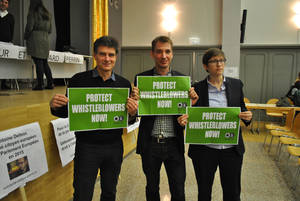 The Greens/EFA group in the European Parliament today expressed its concern and shock at the decision of the Luxleaks prosecutor to demand an 18 month suspended jail sentence and fine for the two whistle-blowers who uncovered the details of "sweetheart" tax deals in Luxembourg, as well as a fine for the journalist that initially reported on the scandal. Today, on the last day of the Luxleaks trial, the Greens/EFA MEPs once again express their solidarity with the public interest actors that exposed details of the unfair tax deals signed with huge multinationals by the Ministry of Finance, even whilst Jean Claude Juncker, now President of the European Commission, was in office. Several of our MEPs were present for during the solidarity soirée on the eve of the trial, and German Greens/EFA MEP Sven Giegold also participated as a witness in defense of the whistle-blowers. We are of the firm belief that public interest disclosures should be protected, not prosecuted, and have fought to propose whistle-blower legislation to protect the workers across the Union that decide to expose information that is in the public interest. Just last week we launched a draft Directive to this effect at an event involving almost all of the political groups in the European Parliament.

The ball is now in the court of the European Commission and the Member States to take action to protect whistle-blowers. We sincerely hope that justice will be done in this case, with the public interest in the disclosures and the rights to both freedom of expression and freedom of information taken into account by the judges. The verdict is expected for the 29th June 2016. 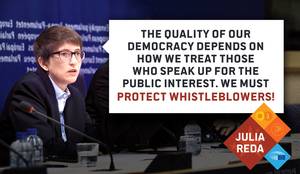