MEPs Jill Evans (Wales) and Jordi Sebastià (Valencia) joined hundreds of others at an event organised in Brussels by Friends of the Earth to focus opposition to the proposed Transatlantic Trade and Investment Protocol (TTIP).

Both MEPs are members of the EFA (European Free Alliance) Group in the European Parliament.

Negotiators from the US and Europe are meeting in Brussels this week, behind closed doors, to take the treaty negotiations forward. 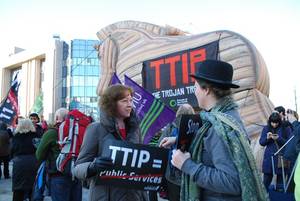 There are now serious concerns that the TTIP will threaten consumer rights and animal welfare standards. In particular, campaigners against TTIP are worried that it could make it harder to restrict GMOs or the use of hormones and other substances in food production.

Campaigners have dubbed TTIP the 'Trojan horse' treaty that will threaten food safety, the environment and public services.

To make the point, they place a massive, inflatable Trojan Horse near the headquarters of the European Commission in Brussels. 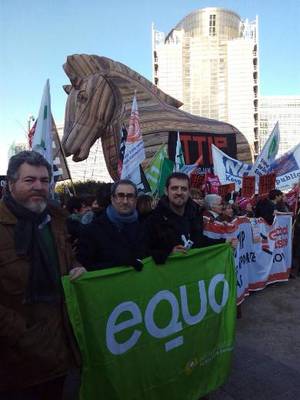 There are broader concerns that under the guise of a trade treaty, democracy will be undermined with the interests of big business put before those of communities, the environment and public services.

The Greens/EFA Group has a dedicated website for our campaigning on TTIP, find out more here http://ttip2014.eu/

EU must fight illegal trade measures at the WTO

EU must remain united in defence of multilateralism