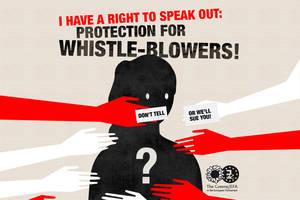 On 4 May 2016, the Greens/EFA group in the European Parliament presented a draft Directive to ensure minimum standards of protection for whistleblowers across the European Union. The Directive, drafted with the help of legal experts, was designed to be a catalyst that would push forward the debate on whistleblower protection in Europe, namely by overcoming the oft-cited argument that was “no legal basis” for the EU Commission to bring forward whistleblower legislation.

The draft Directive was opened to public consultation from 16 May 2016 to 12 September. The majority of participants responded via an online platform called discuto.io, which allowed for public voting and commenting on each paragraph of the draft. Others chose to send their feedback in writing via email or orally. Feedback was received from around 40 organisation and individuals, with 210 comments contributed via discuto.io as well as 833 votes on individual paragraphs.

The feedback received was overwhelmingly positive, though suggestions for improvements were of course made. The main comments received related to the scope of the Directive and who it should apply to, with many regretting the fact that the Directive was limited to “workers”. Others suggested two or three step reporting channels instead of allowing whistleblowers who go straight to the media or even use social media to denounce wrongdoing to be automatically protected.

The summary below to provide both an overview of the main feedback received and also some initial responses from the Greens/EFA group on how this feedback has been taken into consideration.

A few months after presenting our draft Directive, the European Commission announced that they would assess the possibility for further action at the EU level, and the European Parliament decided that it would draft two own-initiative reports on whistleblower protection: one in the Budgetary Control Committee and one in the Legal Affairs Committee. These processes are currently ongoing.

Shortly after, a coalition of trade unions, NGOs, and journalist organisations launched the campaign platform known as whistleblowerprotection.eu to call for a European Directive. And not long after that, the Council of the European Union (composed of the EU Member States) made a public call on the Commission to act on the matter. The Commission then promised that it would undertake an Impact Assessment on whistleblower protection, which is a precondition for proposing legislation.

The campaign to protect whistleblowers is clearly gathering momentum. Thanks to the mobilisation so far, an ever-larger number of actors are pushing forward on the issue. So, we plan to use the feedback received during this public consultation to feed into the ongoing mapping and impact assessment processes within the European Commission and also the whistleblower protection reports being drafted by the European Parliament.