As MEPs hold a debate on the situation in Poland with Polish Prime Minister Beata Szydlo, MEPs from the EFA Group have highlighted concerns with Poland's treatment of its Silesian minority.

The debate focusses on the state of the rule of law in Poland, following the election of the right wing Law and Justice (PiS) party government last autumn.

Of particular concern to EFA MEPs is the new government's refusal to recognise Poland's Silesian people as a national minority. 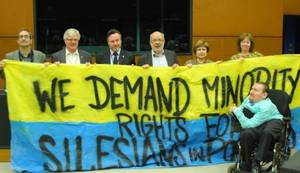 A civic initiative in Poland gathered more than 140,000 signatures calling for legal recognition for Silesians as a national minority.

A draft law was proposed but the new government refuses to proceed with the legislation.

In Poland's 2011 census, some 847,000 people declared their nationality as Silesian, with some 529,000 speaking the Silesian language.

Prior to the debate in the European Parliament, EFA MEPs met Silesian MEP Marek Plura to discuss the issue.