Time to change the record on corporate tax-dodging

A blog by MEP Molly Scott-Cato 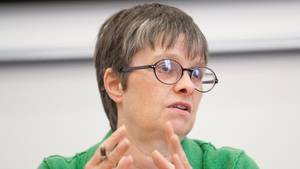 More often than not, the full phrase was "we follow the rules and are willing to comply with any upcoming new tax legislation" - said so often and verbatim that the more cynically minded might believe that somehow the companies concerned had rehearsed their statements beforehand...

And yet, of course, constantly denying that you are breaking any laws tends to give entirely the opposite impression, and I suspect many of the people listening like me to the hollow mantra from big business came away feeling far from reassured by anything they said. Because people simply don't boast about not breaking the law - that's just normal life. And it certainly doesn't need saying by big companies because - perhaps naively in the face of all the evidence to the contrary - people expect them to follow the rules as well

As a Green, I found it truly shocking yesterday how often the representatives of multinationals 'boasted' about obeying the law, as if they are so powerful that legal systems are voluntary for them. Again like a broken record, we heard those big companies explain how much tax they pay and how many people they employ, pretending to ignore that they had all been caught in massive tax avoidance scandals and daring to say that their tax strategies through Bermuda and other places had no impact on the amount of tax paid in Europe.

Of course, what none of the companies actually said was that the reason why they were so graciously happy to follow the exact letter of the tax rules was that they had invested so much time and money on making them so Byzantine, opaque and favourable to themselves. It's taking the entrepreneurial spirit to the extreme - investing heavily in the risky business of influencing the rules in order to maximise the return on investment in the long run.

Yesterday I heard company after company stating, with no hint of irony, that they supported international tax reforms on issues such as BEPS (or Base Erosion and Profit Shifting, where companies artificially shift profits to low or no-tax locations). But then, they would say that, wouldn't they - after all, more than 85% of responses to public consultations on BEPS came from the business sector, effectively meaning that the companies most likely to dodge their taxes have a major hand in writing the anti-tax-dodging rules. Such are the times we live in...

What I find particularly hard to swallow is that we are somehow expected to feel sorry for these poor multinational companies, who complain that tax rules are too complex and unwieldy at the same time as rushing to establish complex multi-country structures to make their profits disappear and thus pay as little tax as possible anyway. If they want clear and simple rules, they can have them - as long as we as decision-makers have clear and simple information on these companies' tax structures, where they make their profits and pay their taxes (or not, as the case more likely might be). Funny, then, that not a single one of the major multinationals in our hearing backed proposals for public country-by-country reporting...

Like me, most people probably think that rules are there to ensure that companies act fairly and transparently...but they'd be wrong. In the world of tax, the rules are there solely, it seems, to allow companies to salvage whatever consciences they have by complying with them, no matter if what they do is fair or not. Not surprisingly, most Europeans do not know enough about taxation, which only makes it easier for companies to hide behind a global effective tax rate of around 20%, safe in the knowledge that most people will simply think that this is what they pay in tax while all the time generating massive profits, using public services and skilled labour without contributing proportionately in return via their taxes. But it's about time big business realised its tax model has to change - people are far less willing to have the wool pulled over their eyes, and the all-encompassing pursuit of profit simply won't wash any longer.

The problem is, of course, that keeping your ill-gotten gains safe from the clutches of the taxman requires a safe place to hide all the swag...and far too many countries are still trying to outdo each other in their bid to become the Ali Baba's cave of the tax world - all strictly within the letter of the law, of course. We also heard from tax jurisdictions like Guernsey or Jersey this week, and they appeared to have the same playlist as the companies they are so eager to please: "We comply with all transparency and exchange of information standards".

In fact, that word "transparency" is the most important - as if somehow being transparent about ripping off ordinary tax payers by setting themselves up as 'low-tax jurisdictions' (heaven forbid we should call them tax havens...) made it all alright... Of course, most also failed to mention that their efforts to be more transparent and to exchange tax information with others were hardly voluntary - they were forced to by international tax reforms. And in any case, what good is it being transparent if you are still charging tax at anything from zero to 10%, with scant regard for the consequences?

For me, the struggle against corporate power is the most important reason to stay in the EU. Together we are stronger, but only if we can ensure that our national governments stop kowtowing to the corporates and going behind our backs cutting rates of corporate tax (as George Osborne shamefully did today) or signing off on sweetheart tax deals.

New legislation will be tough on financial crime, thanks to Greens/EFA group