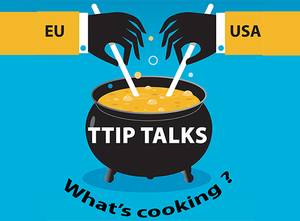 TTIP talks are currently the hot topic on the European Commission trade menu. But what’s cooking? How much should we fear the impacts of a potential EU-US trade agreement on food and farming? Since the start of the negotiations in July 2013, TTIP talks have been strongly criticised for their lack of transparency and public information, as only the European Commission has the mandate to negotiate with US authorities, while the European Parliament and civil society are not fully involved in the discussions and do not have access to key negotiating texts. Yet at the same time, the interests of some of the world's largest agri-industry companies are well-documented and represented at the table. In this context, voices of consumers, farmers and smaller food producers cannot be heard. Their major concerns come from TTIP’s motto: ‘regulatory coherence’. The 'leveling' of regulations in both regions threatens to lower food safety and environmental standards both in the EU and US. For example, the agreement could challenge the restrictions on imports to the EU of chlorinated poultry, hormone treated beef and GMO food products. Good food and agriculture supporters joined pan-European protests in October which saw tens of thousands of citizens take to the streets across the EU. US and European campaigners are mobilising to oppose some of the core goals at the heart of TTIP talks, in particular the Investor State Dispute Settlement mechanism (ISDS), as well as attempts to weaken the EU’s precautionary principle and public procurement rules. The affect that the deal will have on jobs, food sovereignty, small-scale-farming, agriculture and consumers' rights cannot be underestimated.  Choosing what we eat, knowing what we eat, and being able to source what we eat, is not in the interests of the agro-food industry, who have made their intentions for TTIP clear. They want to challenge everything from labelling requirements, to how food is produced, to how animals are raised and slaughtered, and TTIP is their new vehicle. The inclusion of ISDS in TTIP would give the right to companies to sue states in private arbitration courts. Under the mechanism, corporations can challenge progressive regulations on food and public health standards, if such laws impact their profits. Such a mechanism could undo decades of democratic decision making The Precautionary principle, a major cornerstone of EU food safety and other public health policies, is in total contrast with the US food safety rules. In the EU, if there is a risk that science cannot yet determine with certainty, then the precautionary principle may apply and prevent a product to be placed on the market. But in the US regulators need to prove the product is unsafe before restrictions can be imposed. Hence, the different approaches have led to the US wrongfully claiming the precautionary principle is "unscientific". The US agro-chemical industry even cited the EU neonicotinoid ban, aimed at protecting bees and other pollinators, as an example of abuse of the precautionary principle. Because of intense lobbying by industry, the revision of the EU strategy on Endocrine Disruptors - found in pesticides and thus food, and responsible for many health problems - keeps being delayed by the European Commission. In the US many school lunch programmes or publicly funded food programmes benefit from national public procurement rules to encourage eating locally grown and organic food.  In Europe, some countries are taking similar steps. New rules on public procurements negotiated under TTIP could put these initiatives at risk. Additional evidence that bad diet and trade deals are interconnected has been pointed out by Anand Grover, UN Right to Health Rapporteur: 'Studies show that countries adopting market deregulation policies experience a faster increase in unhealthy food consumption and mean body mass index, an indicator of obesity.' On 10th December, in the first event of its kind, the Greens/EFA group in the European Parliament with the support of civil society and farmers’ organisations from both sides of the Atlantic, will organise a conference on the impacts of a potential EU-US trade agreement (TTIP) on food and farming. Given the many concerns raised by TTIP food safety standards, consumer rights, animal welfare and the wider impact on rural areas, this conference aims to be an open and frank debate on the potential consequences of the EU-US trade agreement for food and farming, with invited speakers from the food and farming sectors, civil society and respondents from the European Commission. On the eve on the event in the EP, new EU Trade Commissioner Cecilia Malmstrom and US Trade representative Michael Froman are supposed to meet 'to see if (they) can put a fresh start in those negotiations'. This conference will be an opportunity to follow-up on this statement and check if indeed TTIP talks will not undermine food and farming standards on both side of the Atlantic.

On 8th December, 2 days ahead of the event, you are welcome to the Twitter discussion over TTIP perspectives on Food and Farming. Raise your voice, and ask questions on this issue together with a broad community of stakeholders from various fields using the hashtag #TTIPfood'. More info here We will also be tweeting during the conference on 10 December, please follow us on @FoodRevEU and @TTIPBeware using #TTIPfood in your tweets. We’ll also be live streaming the event. More information will follow on the event page.